Áine & Rory's Intimate Wedding In The Museum of Literature

Marketing Executive Áine Lucas married Rory Allwright in an intimate ceremony at the Museum of Literature Ireland in the midst of COVID last September.

The pair met In UCD through some mutual friends many, many years ago, and as he said in my speech, Rory was fixated from the first time their eyes met in the Quinn School. 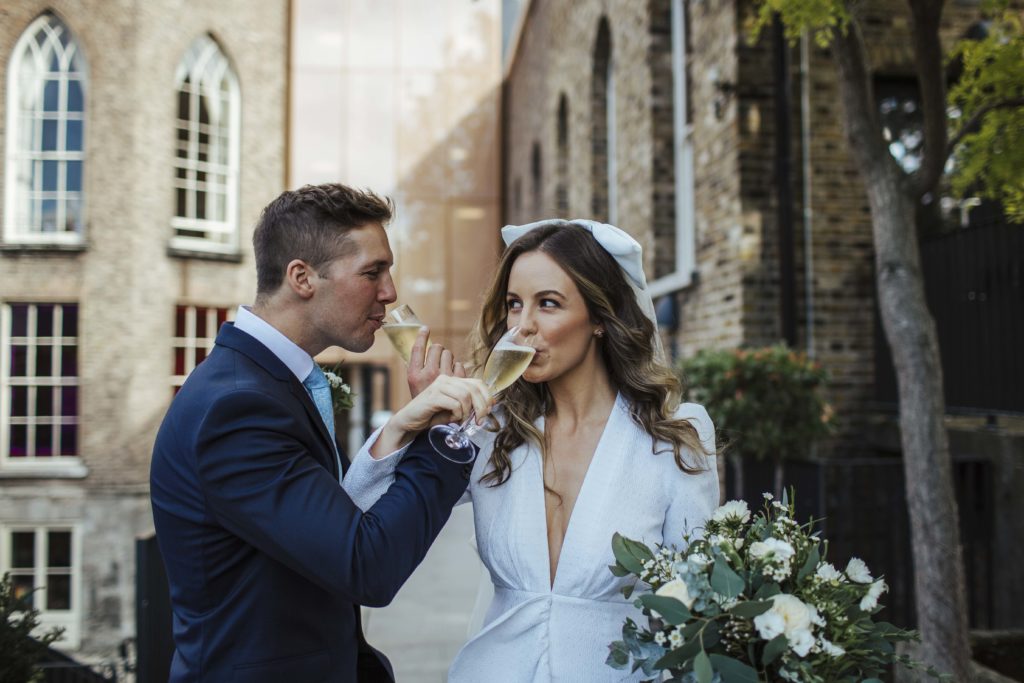 Though he was a mere Arts student at the time, Rory made a point of spending a lot of extra time in the business school to chance future encounters... which has worked out well! 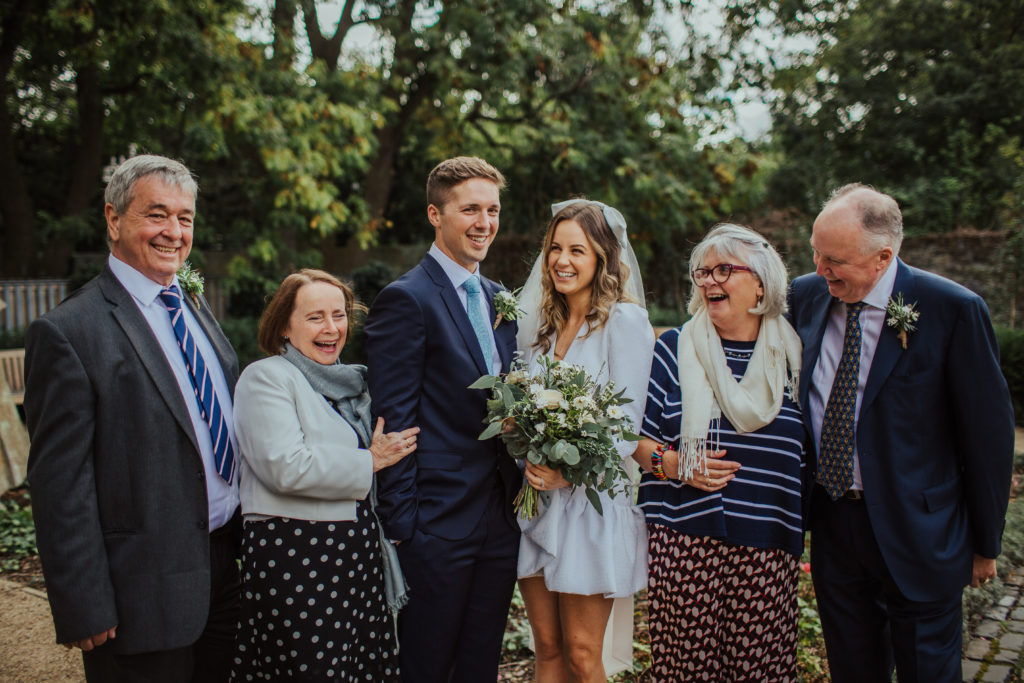 After many not so subtle hints, the groom ‘surprised’ Aine with flights to Iceland for Christmas, where he had planned to propose. The couple spent a perfect week there in February 2018, at the peak of the snowy season. 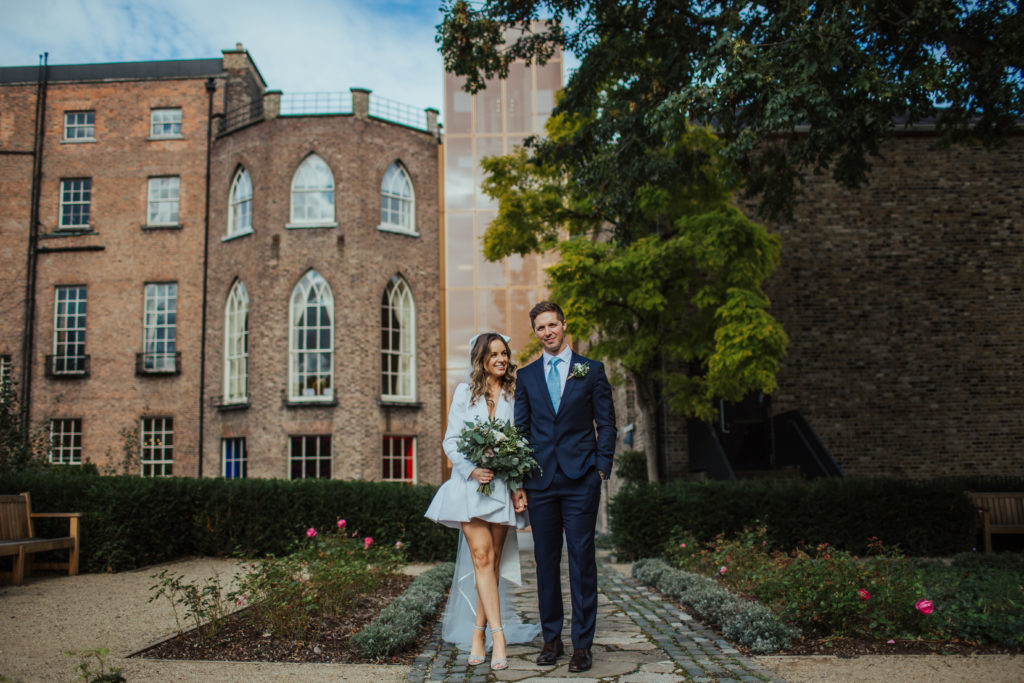 After agonising over finding the ideal spot for days, Rory eventually got the courage and asked the question after a fantastic dinner at Kol restaurant in Reykjavik towards the end of our stay. 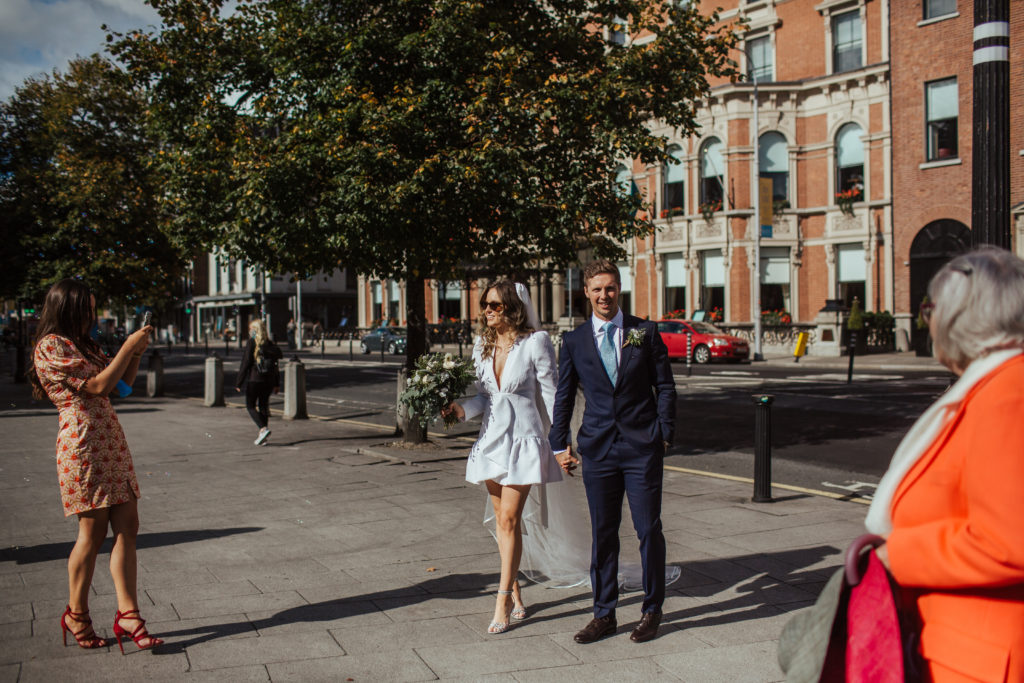 The dress ended up being completely different to whatÁine had originally planned – just like the wedding! For their original May date, she had planned on wearing a classic full-length slip dress, but getting just one wear out of it didn’t sit well with her, so instead, the bride looked at renting and found the perfect match in Covet. In addition to the sustainability factor, another bonus of renting meant that when COVID turned our plans upside down, Áine wasn’t limited to having to wear the dress she had first picked; they weren’t going to be having the same ‘big day’. 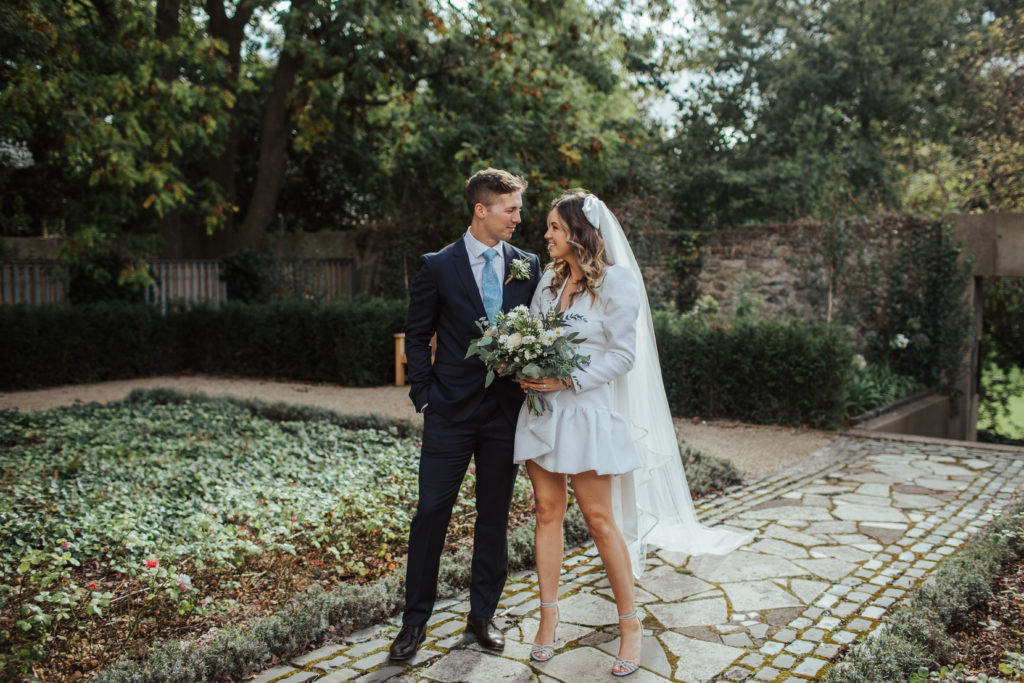 Áine toyed with a midi length for their new city wedding plans; however, when she went into Aleana in Covet to see about styles and them making something up for me, the bride ended up trying on one of her new arrivals - the voluminous mini dress – with the added drama of the veil, and the addition of the satin bow, Áine was sold! 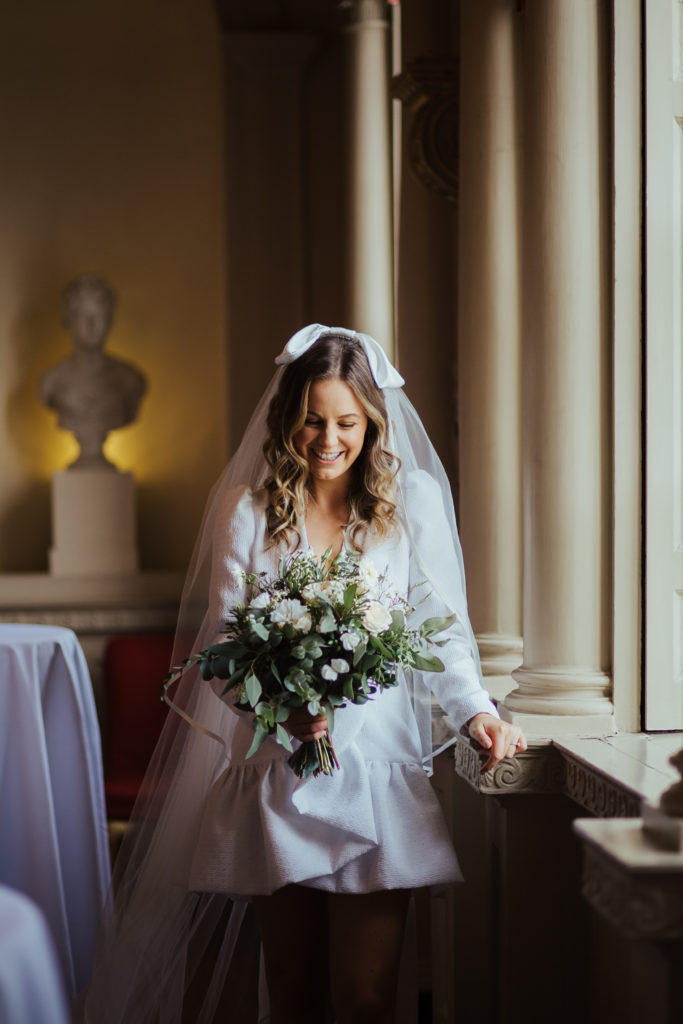 Given the restrictions on salons this year, the bride's beauty prep was largely limited to what she could do at home.Áine ramped up her skincare routine in the months ahead with recommendations and guidance from Dawn at Floraison. 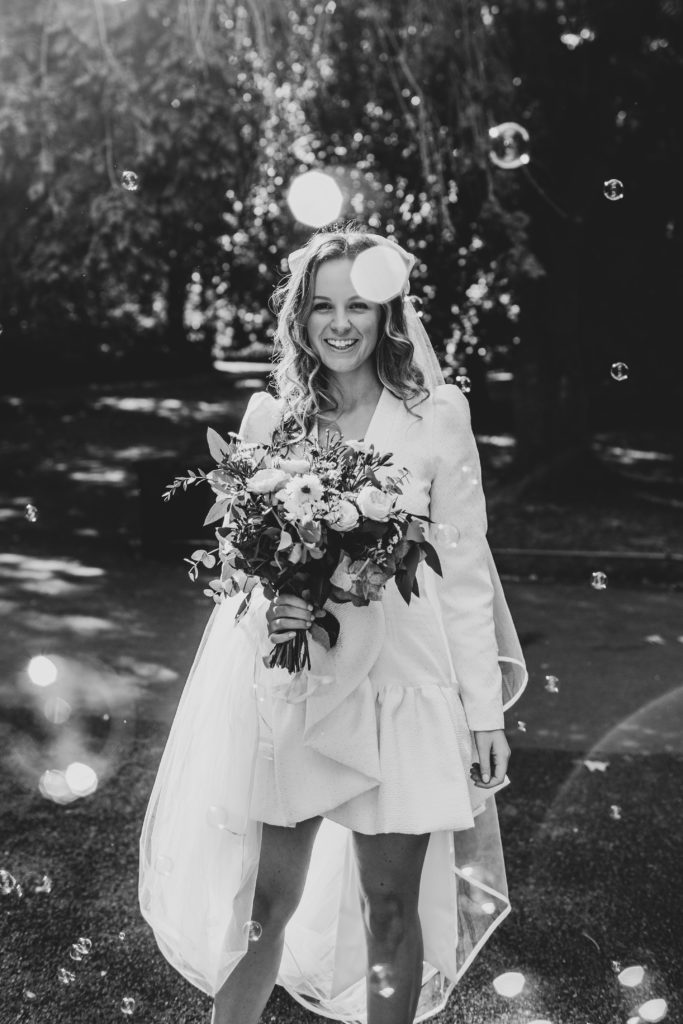 Áine also undertook countless virtual bootcamps and Pilates classes in the lead up to the wedding, as much for her own sanity over lockdown as for the wedding. Still, considering she ended up walking down the aisle in a mini dress, Áine was delighted she had!  Áine chose a new scent, Byredo Gypsy Water, specifically for the day. Scent and memories are so interlinked, and the bride knew Gypsy Water’s aromatic and citrus notes will always remind the couple of the day. 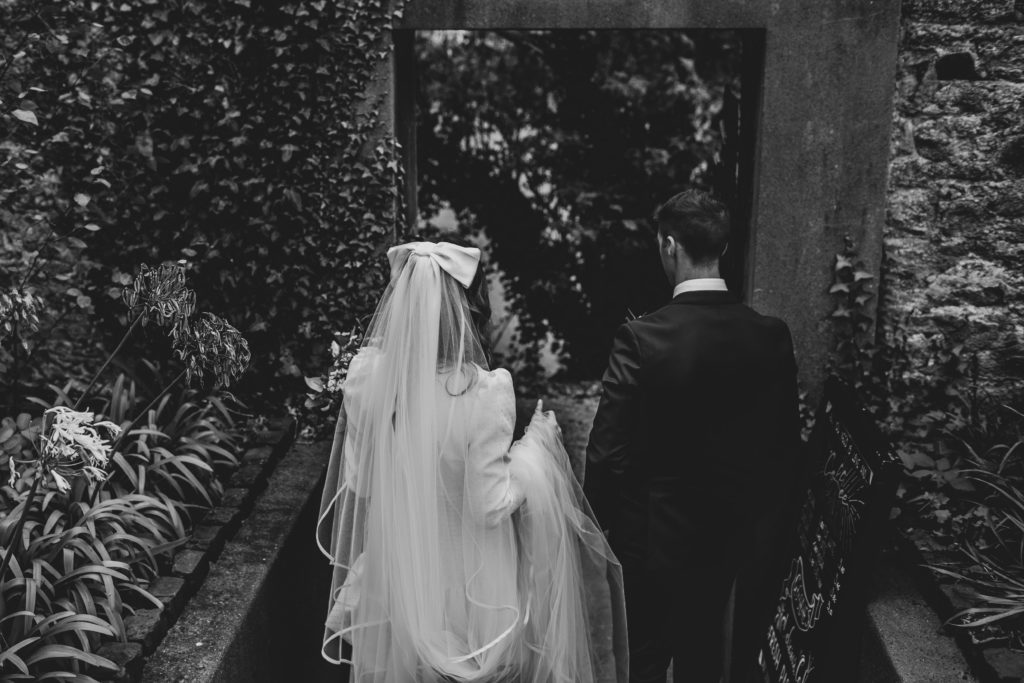 After COVID put an end to their original plans for May, the couple was back and forth so many times on what sort of day they would have and when they'd have it. When Áine and Rory first cancelled, the pair naively thought all might be back to normal by the end of the summer and hoped to get to go ahead with their family and friends in September. Of course, they now know that wasn’t to be. Having been glued to every news bulletin and update on restrictions, seeing the numbers go down, then going back up, the bride and groom decided they’d push ahead with the wedding as the most important thing to the two was to be married. 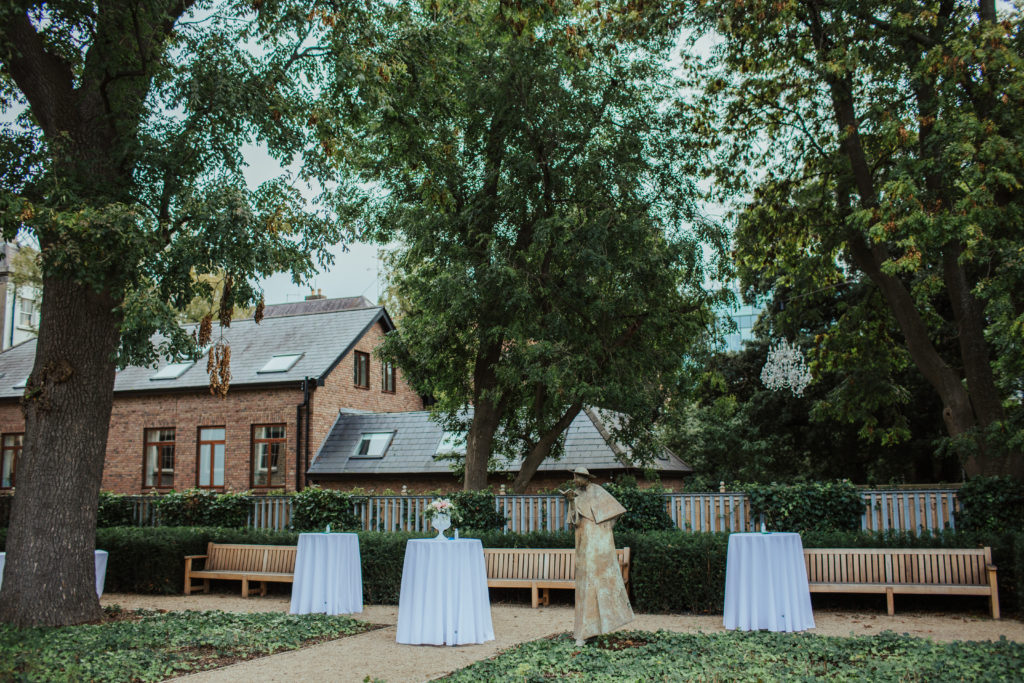 Rory and Áine had September 23rd booked for the registry office. Still, a week and a half out from the date, Áine discovered that MoLI (Museum of Literature Ireland) on Stephen’s Green was now hosting weddings, so she made the last-minute decision to move the ceremony and reception to the Georgian surroundings instead. MoLI is the original home of UCD, so, despite their lack of literary ties, it felt pretty apt considering where the pair had met. The museum had only opened in 2019 but had a perfect mix of old and new, with beautiful bay windows for our ceremony and gardens opening onto the Iveagh Gardens for the reception and photos. After the reception, the wedding party walked across Stephens Green in the sun, with surprise bubble guns in tow, to Merrion Row and Bang restaurant. The couple couldn’t recommend the teams at MoLI and Bang more, both of who made the day beyond memorable. 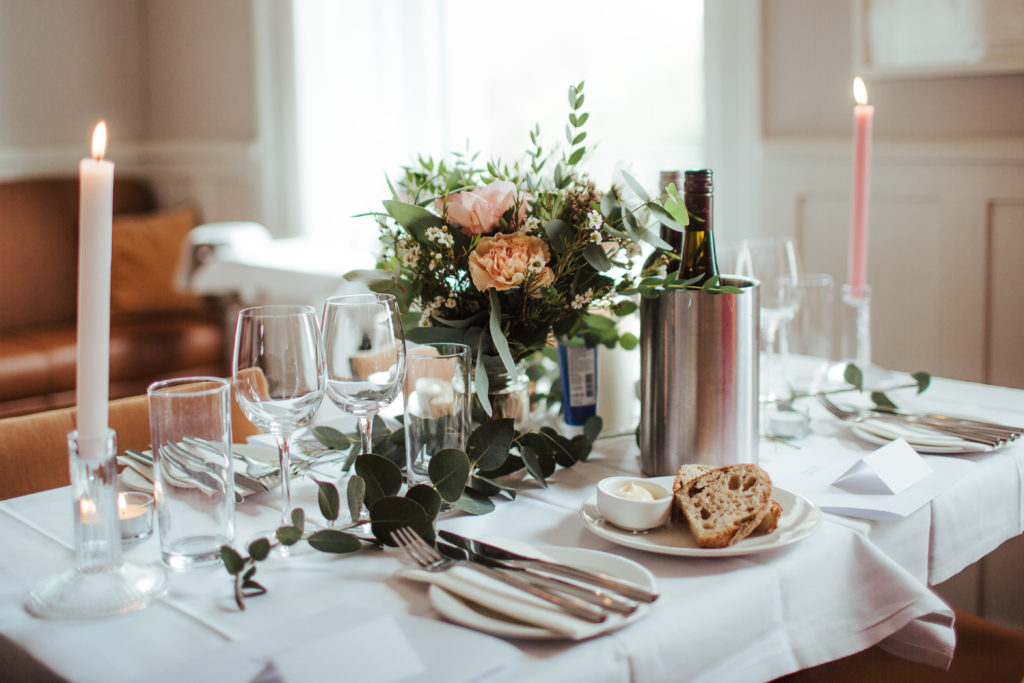 It’s hard to justify booking entertainment when you’re at level three of COVID. You would ultimately end up leaving someone off the guest list to allow for the entertainer, a problem when we were restricted to 25 attendees. We focused on keeping our guests guessing by moving them around a couple of different locations, doing some of the speeches outdoors and including everyone in a bit of an impromptu photoshoot in Stephen’s Green. 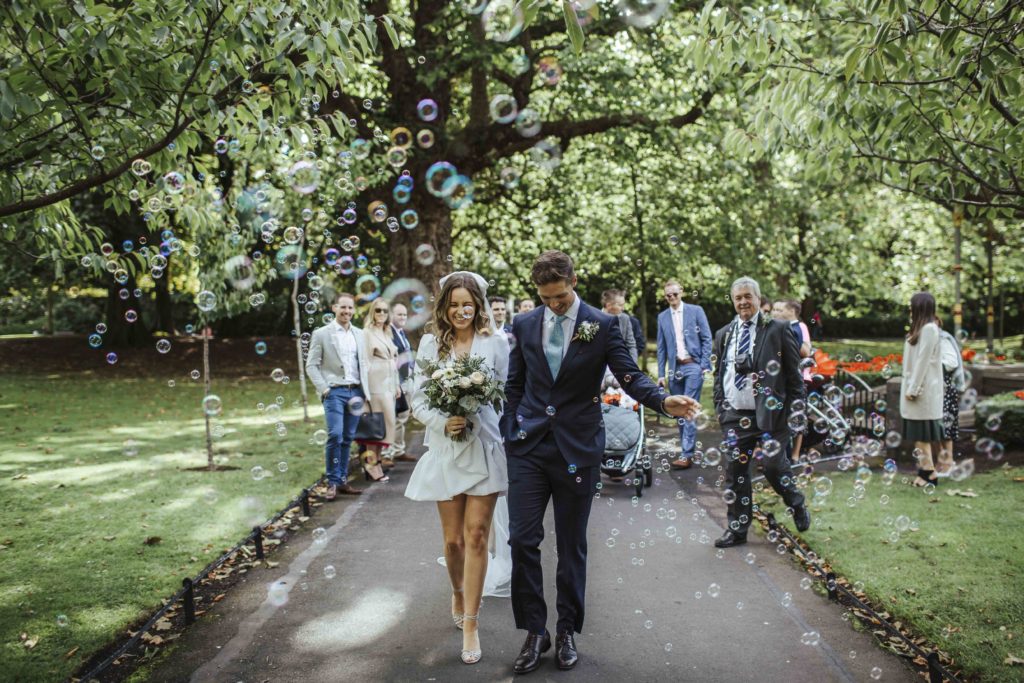 If there was an unforeseen benefit of Covid’s number restrictions, maybe that we could spend real quality time with each individual who was there. The reality was that our guests, like us, may have been a little starved of an outing after a lacklustre summer, so they all brought great energy and laughter to make it a perfect day. 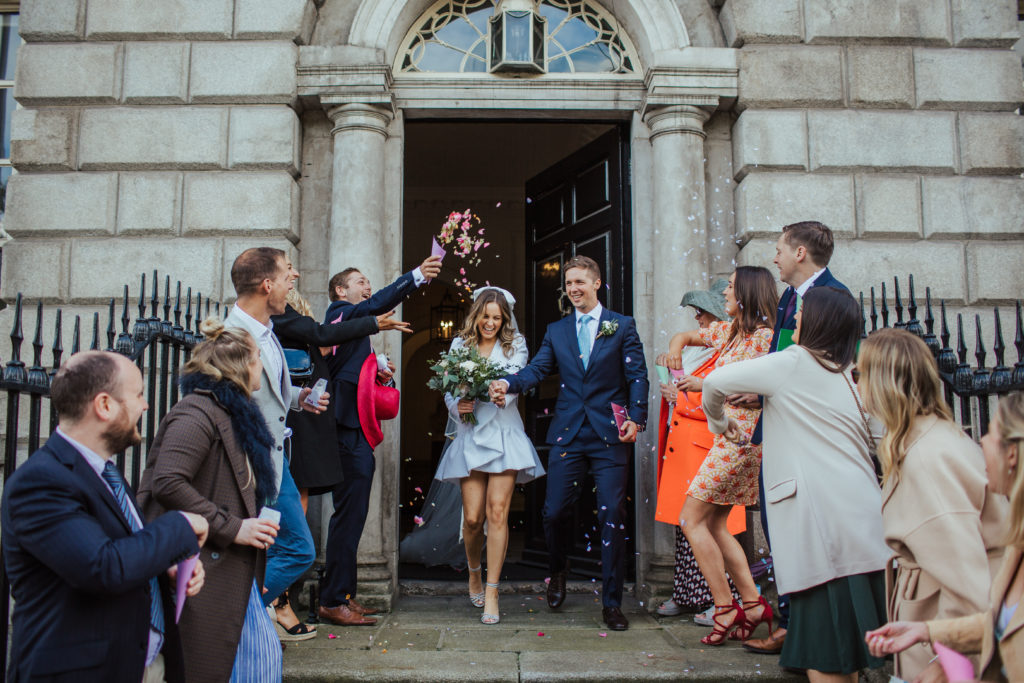 For the newlyweds, the best decision was pressing ahead. This year, the uncertainty of COVID restrictions and timelines took the stress of wedding planning to the next level for all couples this year. For Áine and Rory, who had only planned their initial wedding four months out, they hadn’t been dreaming of a Pinterest perfect ‘big day’, just on finally saying I do. 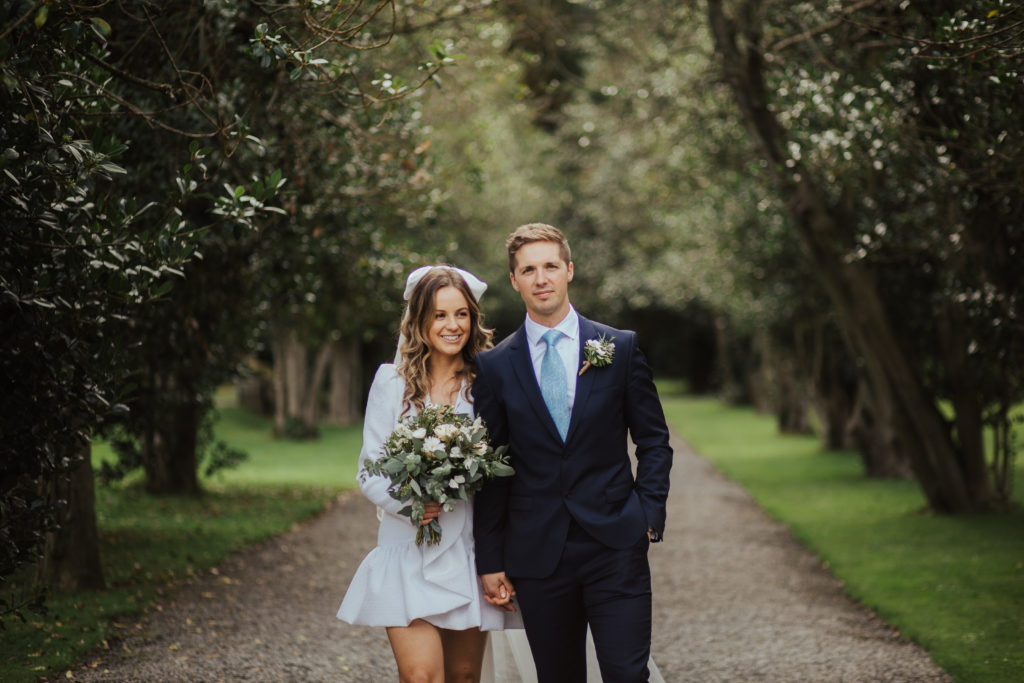 Even though it wasn’t the day the pair thought they would have, they wouldn’t change it for the world and can only recommend the intimacy of a smaller day, even outside of the pandemic. 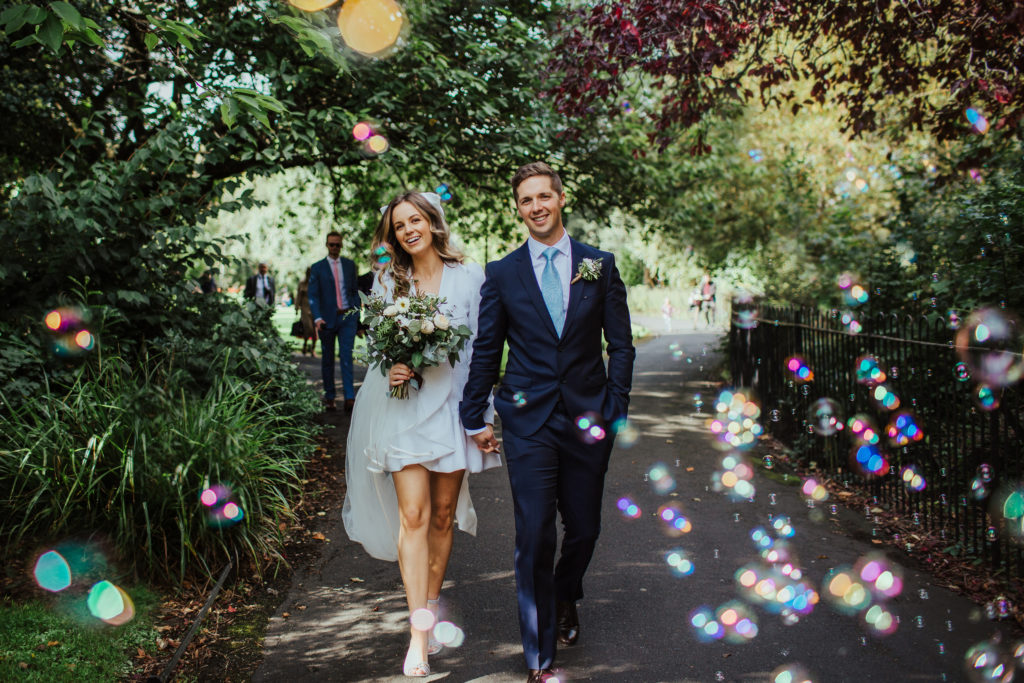 Given how the day exceeded all expectations, the couple wouldn’t say there were any. 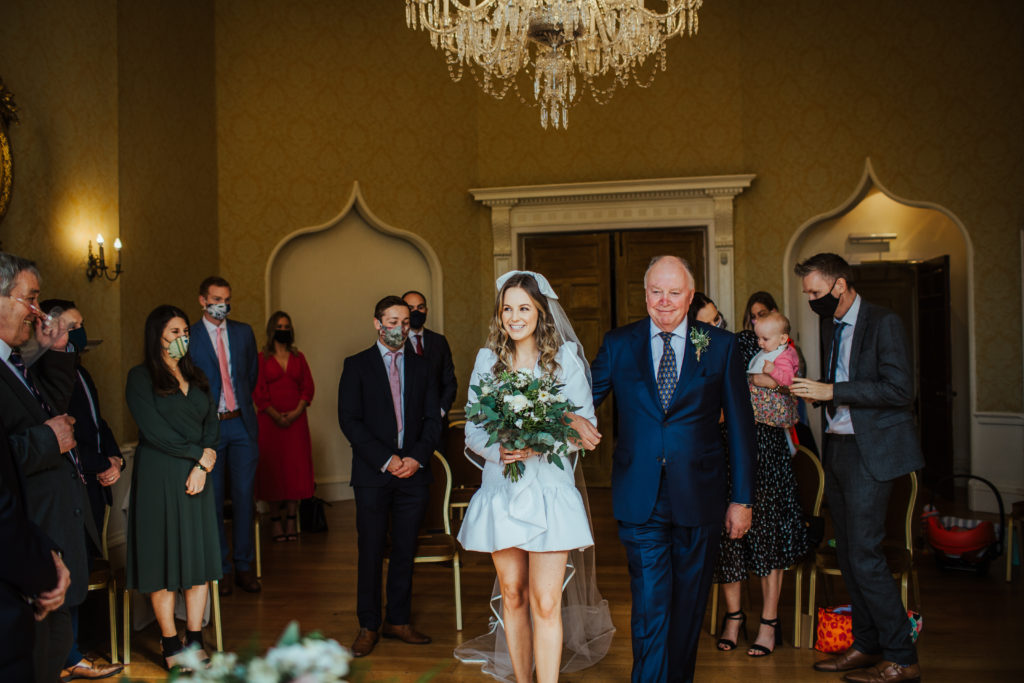 Restricting numbers was incredibly tough, but family and friends have been unbelievably kind with their words and in understanding the lack of control the two had over attendance at their day.