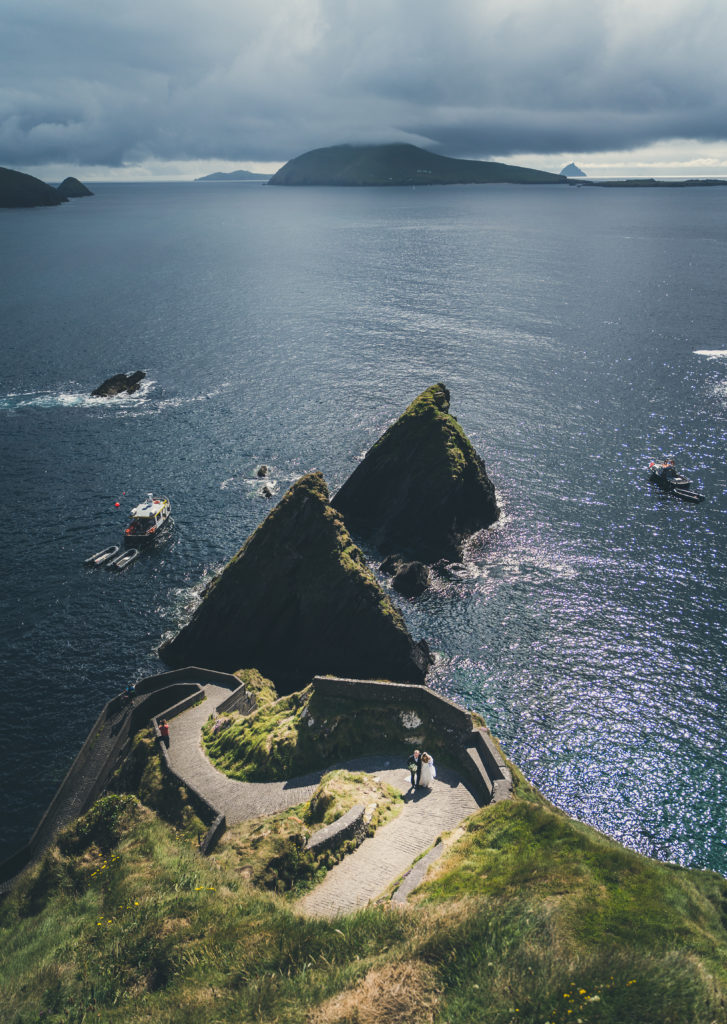 Daithi, from Kerry, and Caitlin from Ohio, met seven years ago in Cork. She was studying abroad for a student teaching program from America and Daithi was working and living in Cork. The couple met through a teacher at Caitlin's school, who offered to carpool her in the mornings. 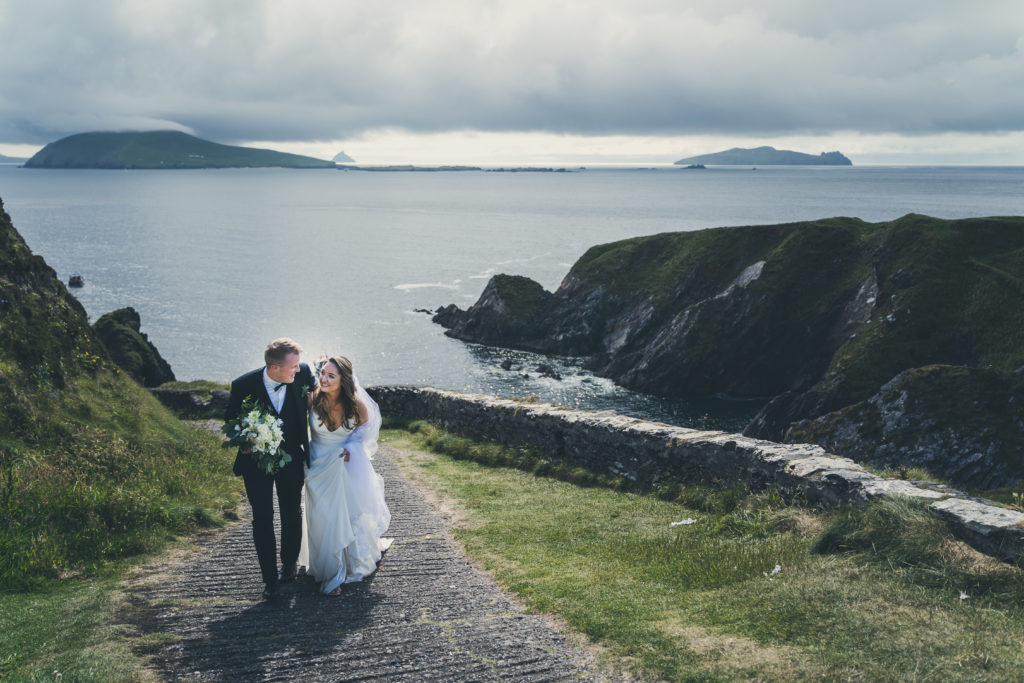 Daithi was his roommate, so it all began with early mornings, oatmeal, coffee, and a bubbly, happy, bright-eyed Kerry man who eagerly chatted to her each morning before eventually asking her to go on a date! Seven years later, they are happily living together in Chicago, Illinois with many trips back to his home in Ventry to visit family. 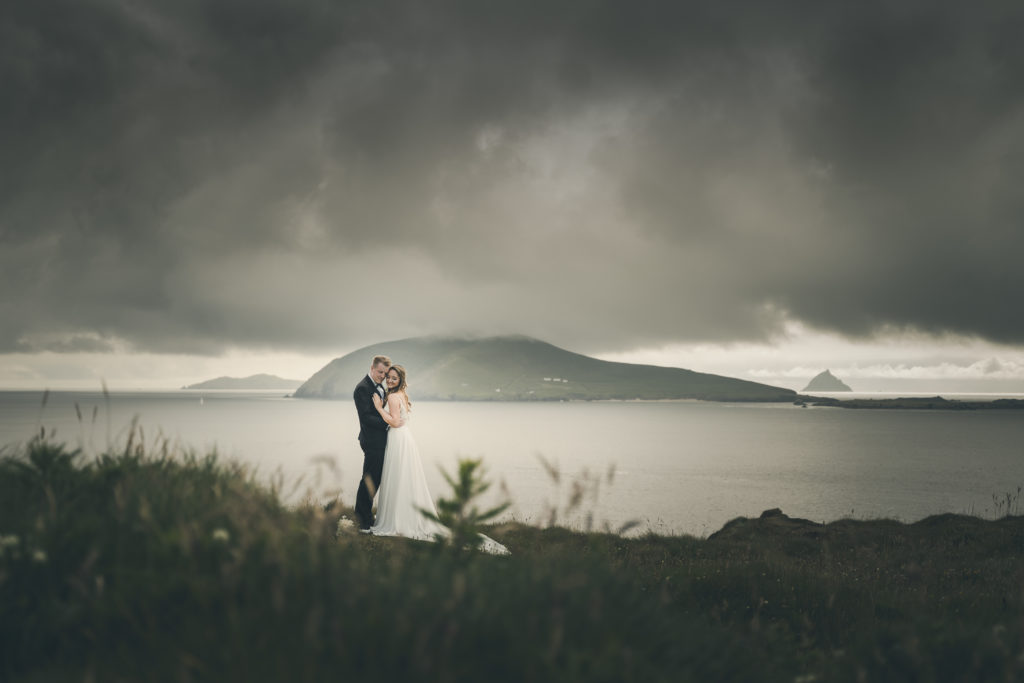 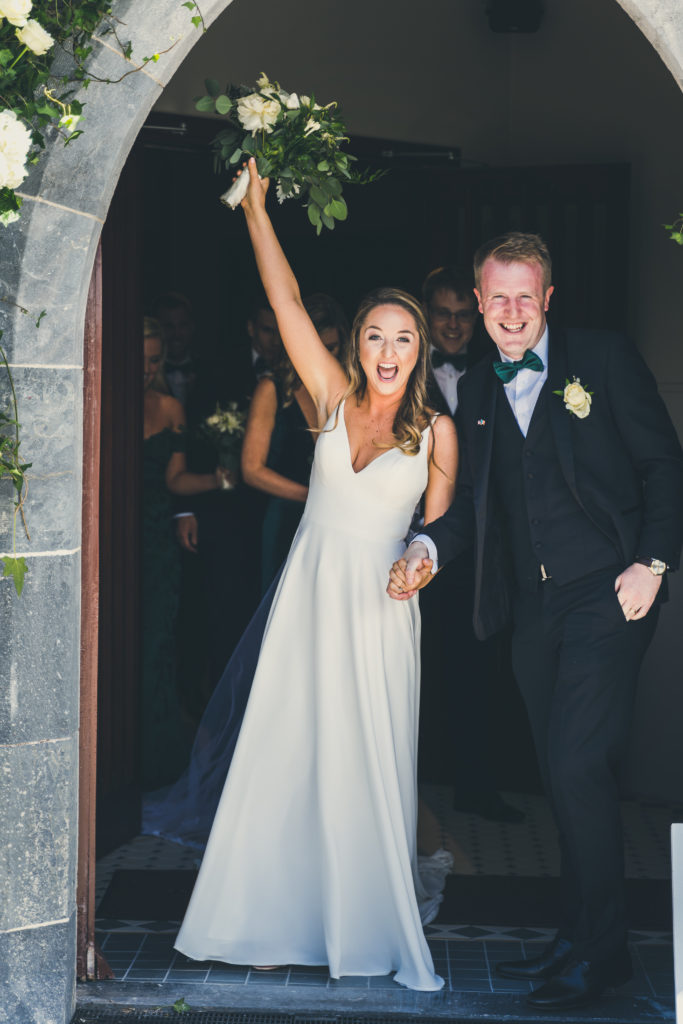 Daithi proposed to Caitlin while back home in Ventry after a hike out around the Blasket Islands. He took her back to the spot where they had first taken a picture together at the beautiful Coumeenole Beach nearly seven years ago. 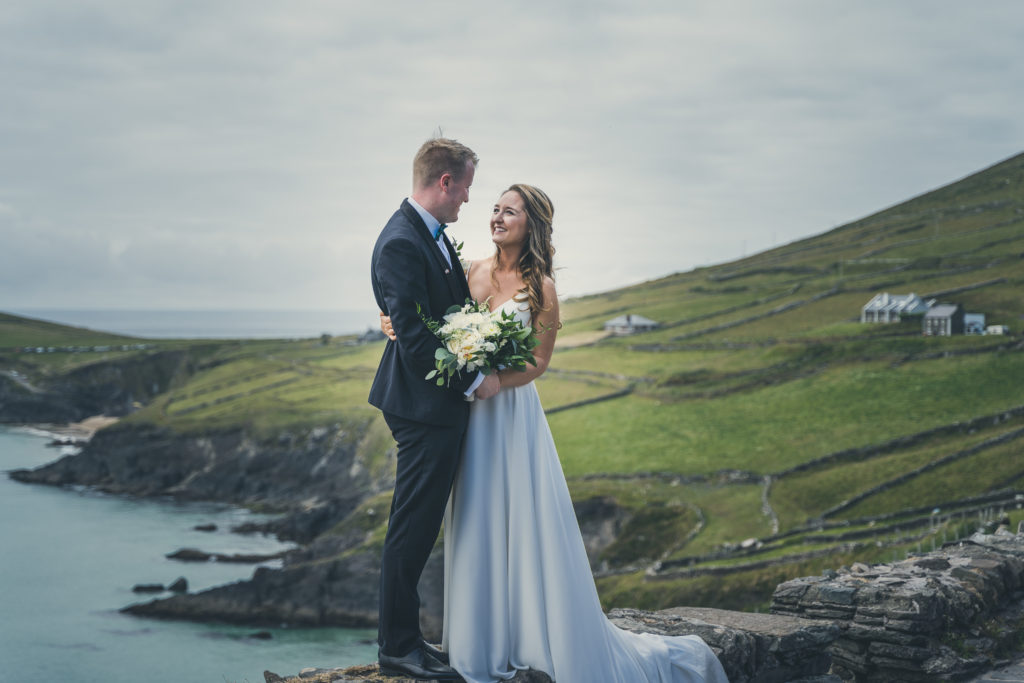 After arriving, he got down on one knee while a fiddler played in the background. Of course, I was very surprised and filled with so much joy! 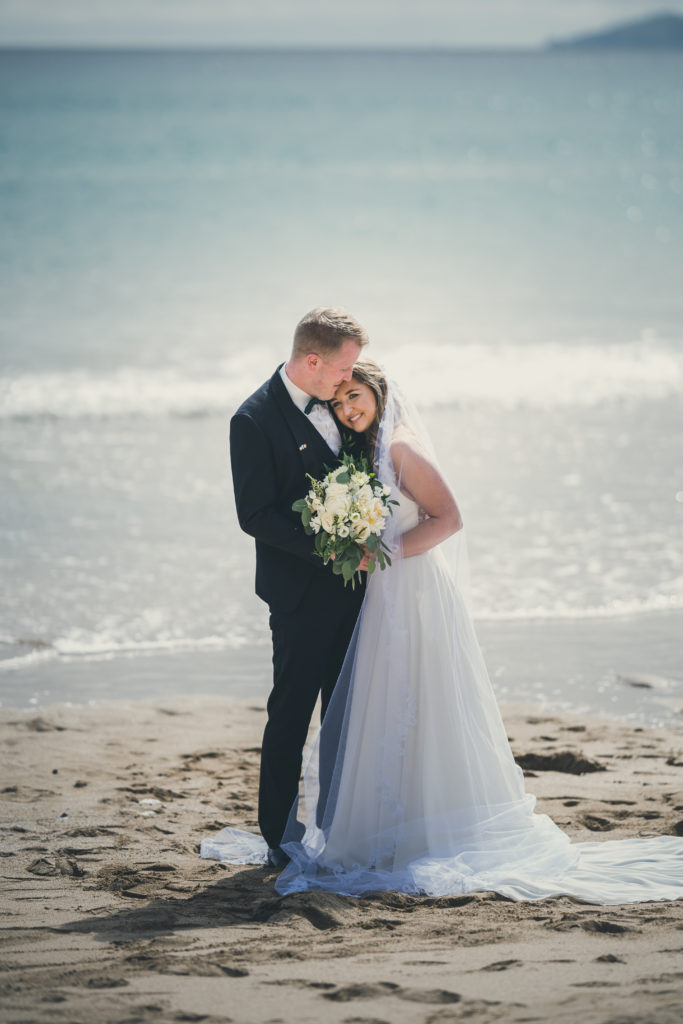 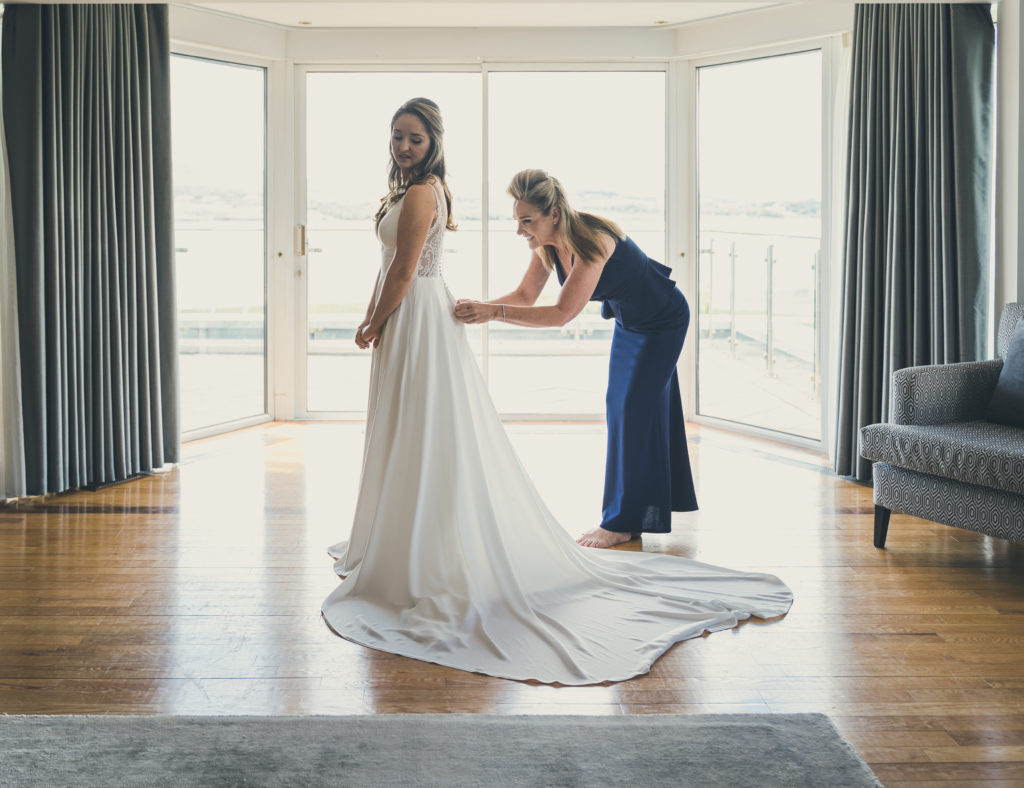 Caitlin said yes to the dress at BHLDN in Chicago, Illinois with her mother and three sisters! After a fun-filled day searching around chilly Chicago, they were delighted to arrive at BHLDN, a bridal shop of anthropology. The group were treated to sparkling Rosé and the BHLDN staff made the process so seamless and fun. 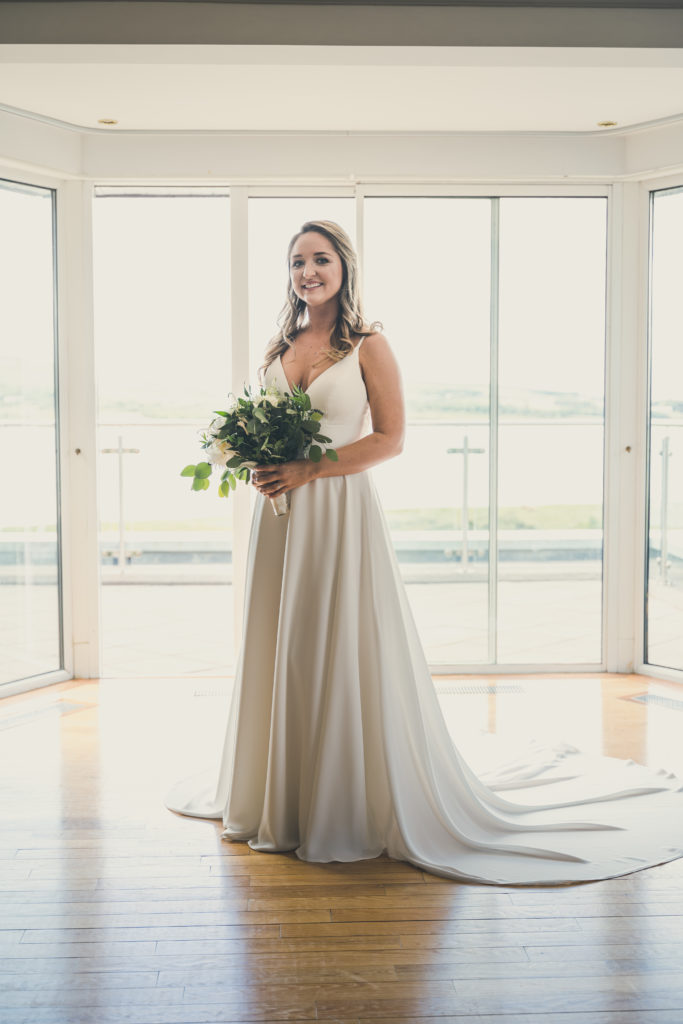 The dress I chose was The Beloved gown, and it was only the third dress that I tried on! Judging by the looks on my sisters’ faces, I could tell this one was the dress! 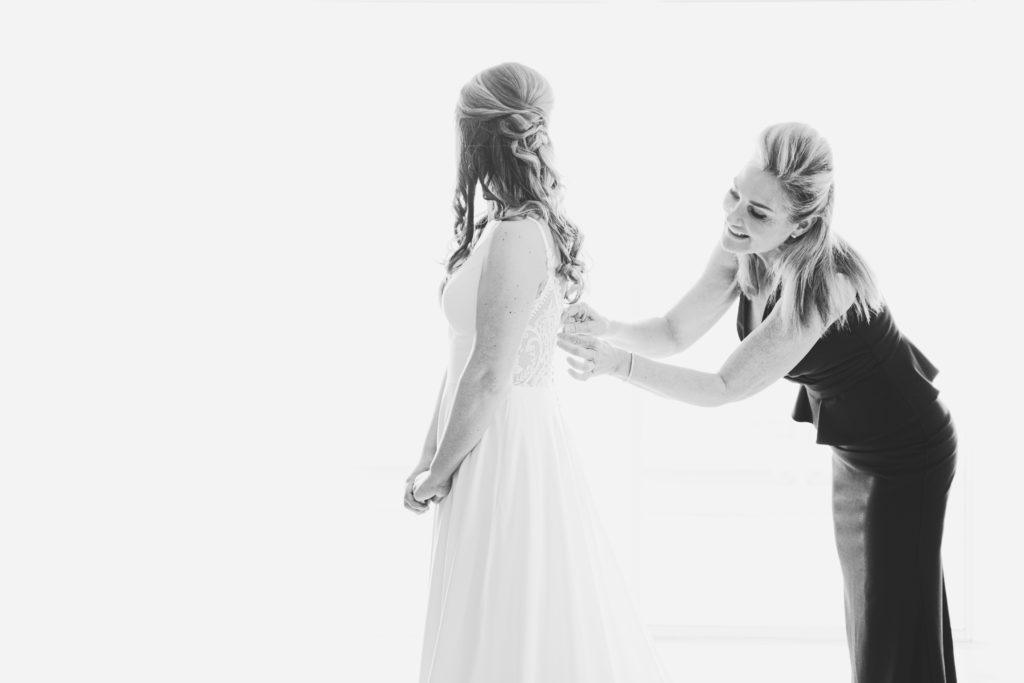 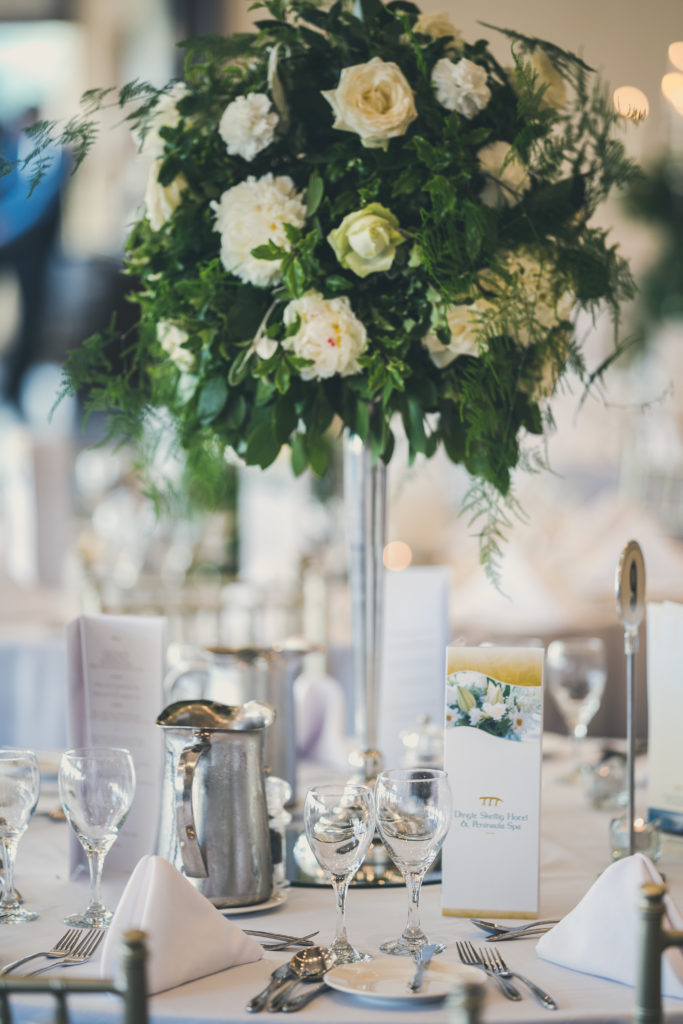 The venue, The Dingle Skellig Hotel, was such an easy pick for the couple. Seeing as Daithi is a local to the area, the soon to be bride and groom had heard rave reviews and attended many weddings at the Skellig Hotel which left them with an impression of the staff’s attentiveness, warmth, and kindness. Not to mention the gorgeous views overlooking the ocean out on the veranda! 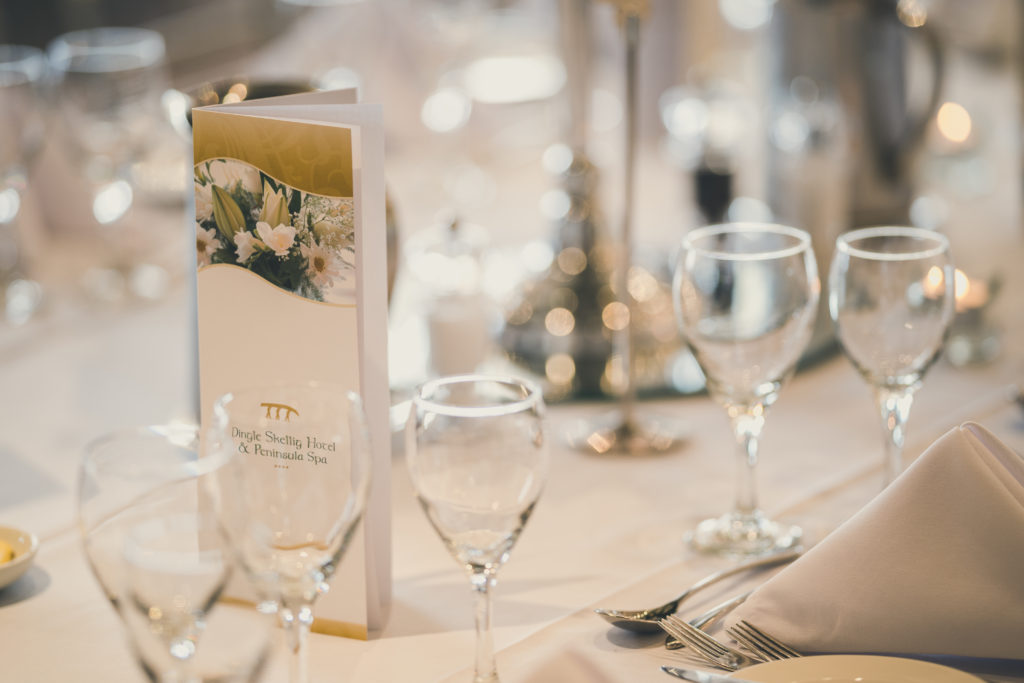 We were blessed with a bright and sunny day which added to the whole atmosphere and allowed our guests from America to really see Ireland at its finest. 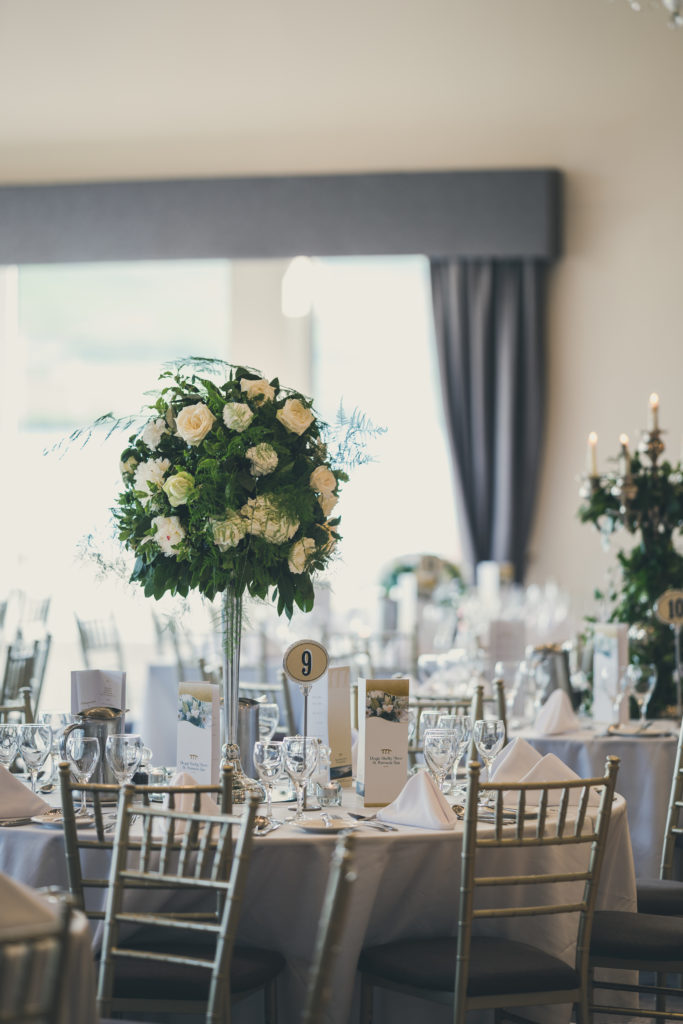 The couples favourite part of working with the Skellig was the food tasting! Definitely one of the highlights of wedding planning! 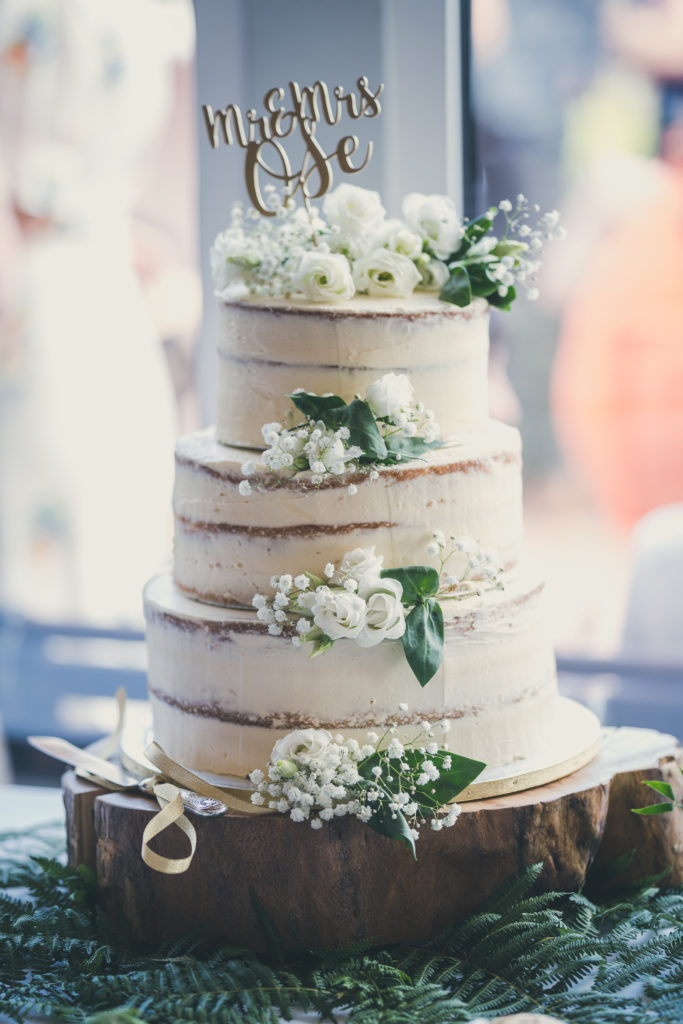 The wedding band was The Kilkennys, they were the couples first pick as they were the first band Caitlin saw in Ireland while studying abroad those many years ago. Caitlin had never seen a wedding where nearly all the guests were on the dancefloor, however, The Kilkennys managed to make it happen! 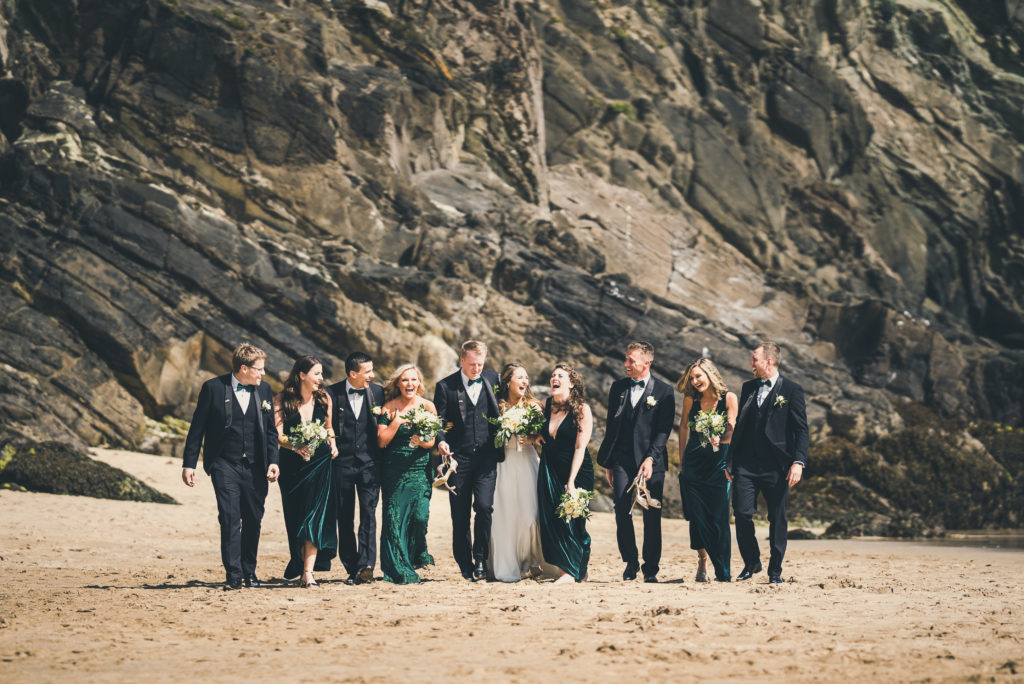 One of the best memories I have from the wedding was when the band orchestrated an Irish and American dance off. It really got people dancing and hyped up the energy of the entire place! At one point, I remember my husband being tossed in the air and my brother in-law doing his ‘best’ Irish jig, which was pretty hysterical! 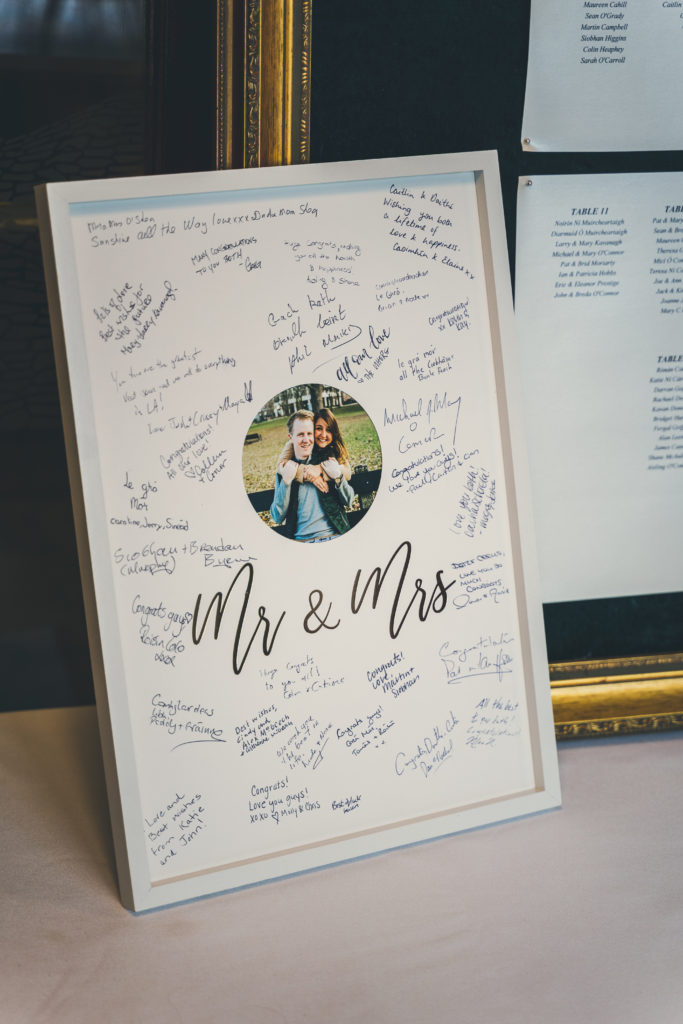 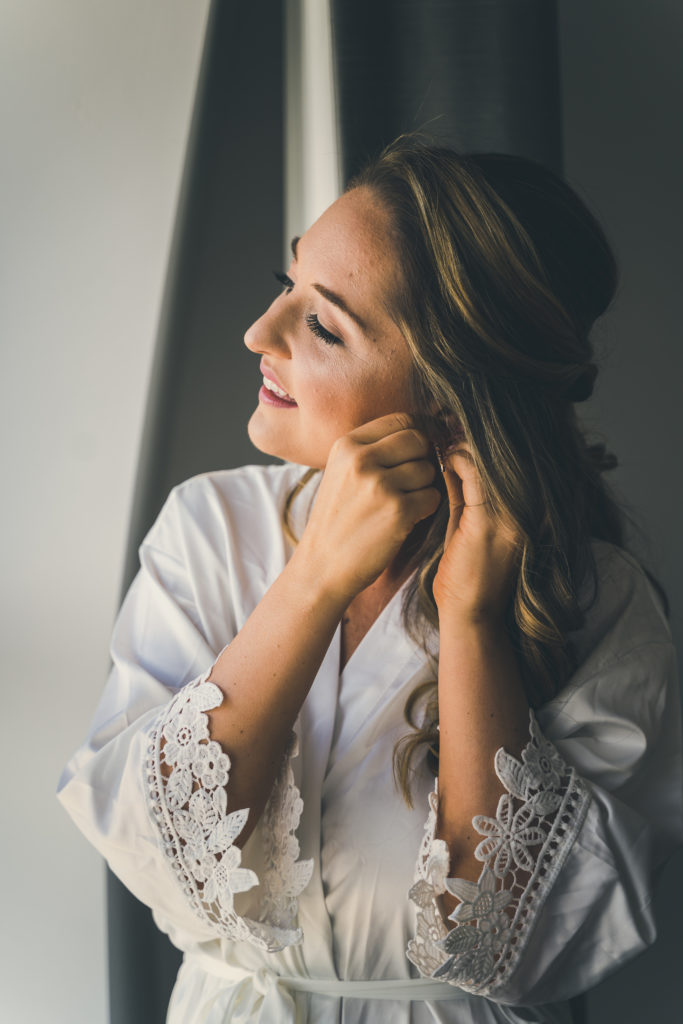 Eimear at The Dingle Skellig Hotel was incredible. She was so calm, fun to talk to, and did my make-up exactly how I wanted it. 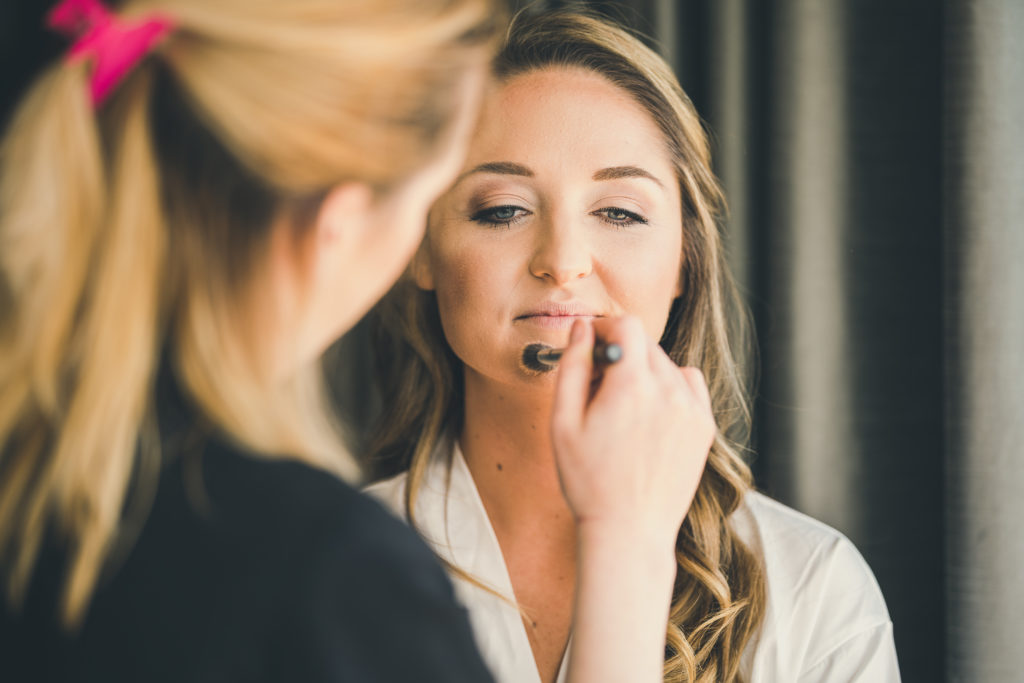 Caitlin's sisters ended up needing help too and Eimear was more than happy to step in. Additionally, she gave the bride a St. Tropez tan the night before which looked incredible, along with doing beautiful shimmer pale pink nails. 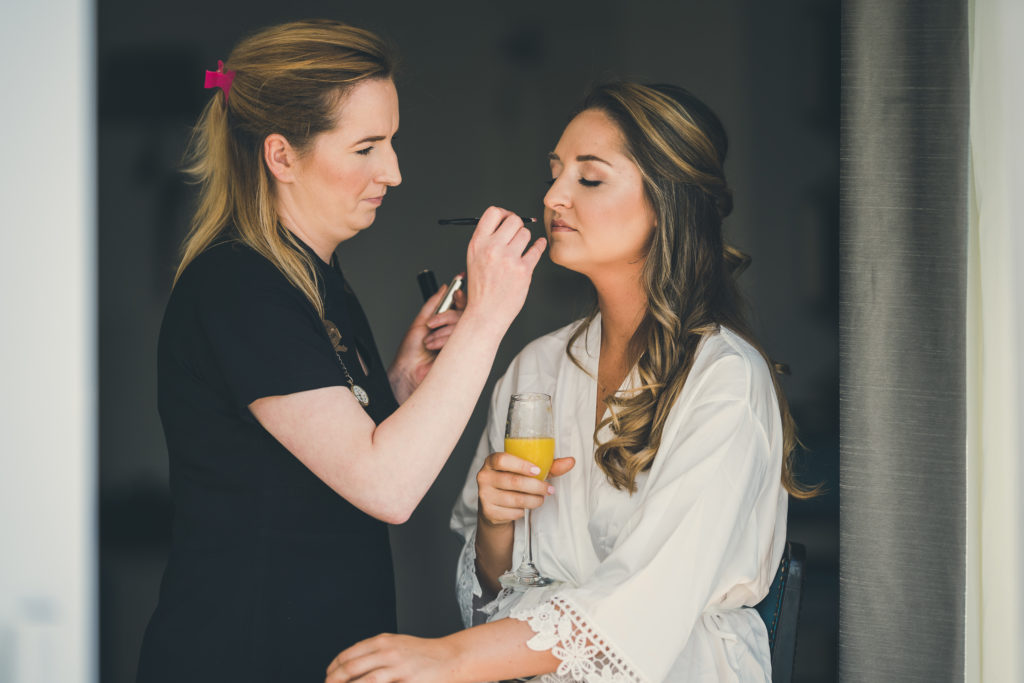 I actually didn’t wear any perfume, I honestly totally forgot! The morning is so fast paced, just when you think you have so much time, it’s go time before you know it! 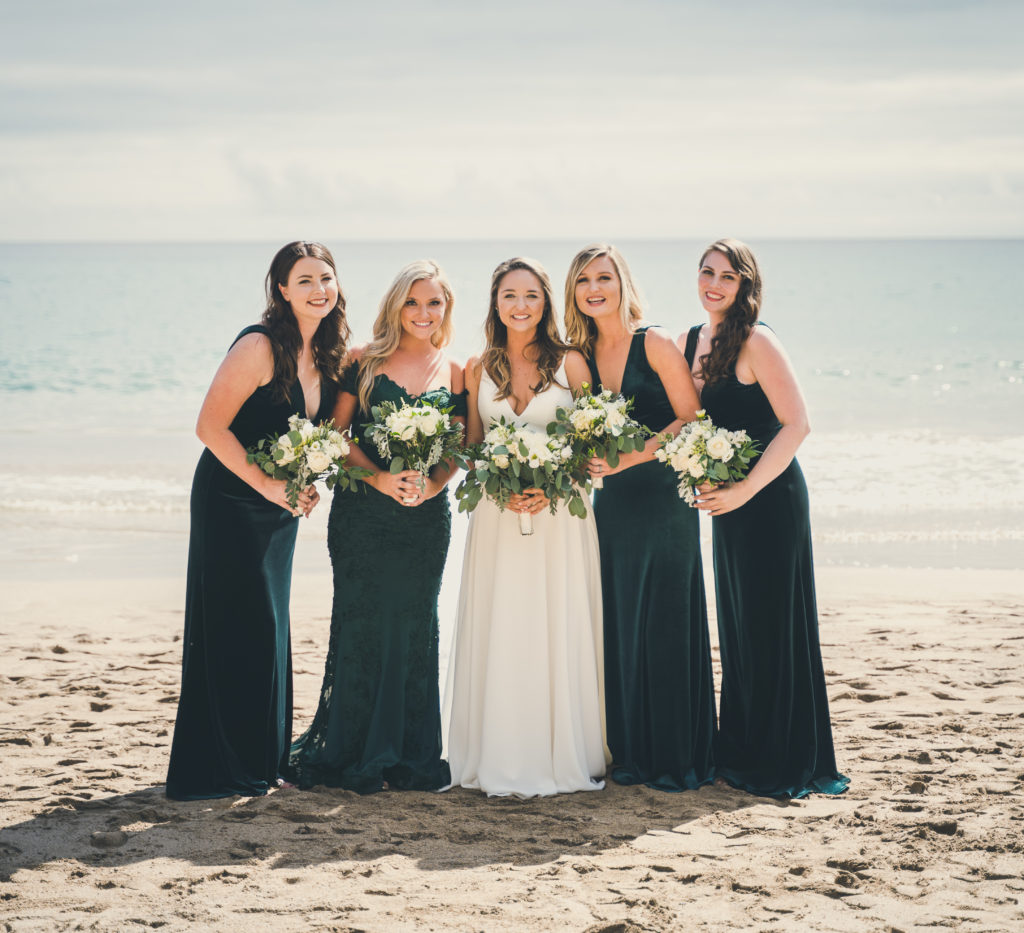 Caitlin's bridesmaids were her sisters and cousin. Her sisters, Lauren, Natalie, Isabel and cousin Crissy were such a special part of the day. The girls wore a dark green velvet BHLDN dress, which was absolutely stunning on each of them. 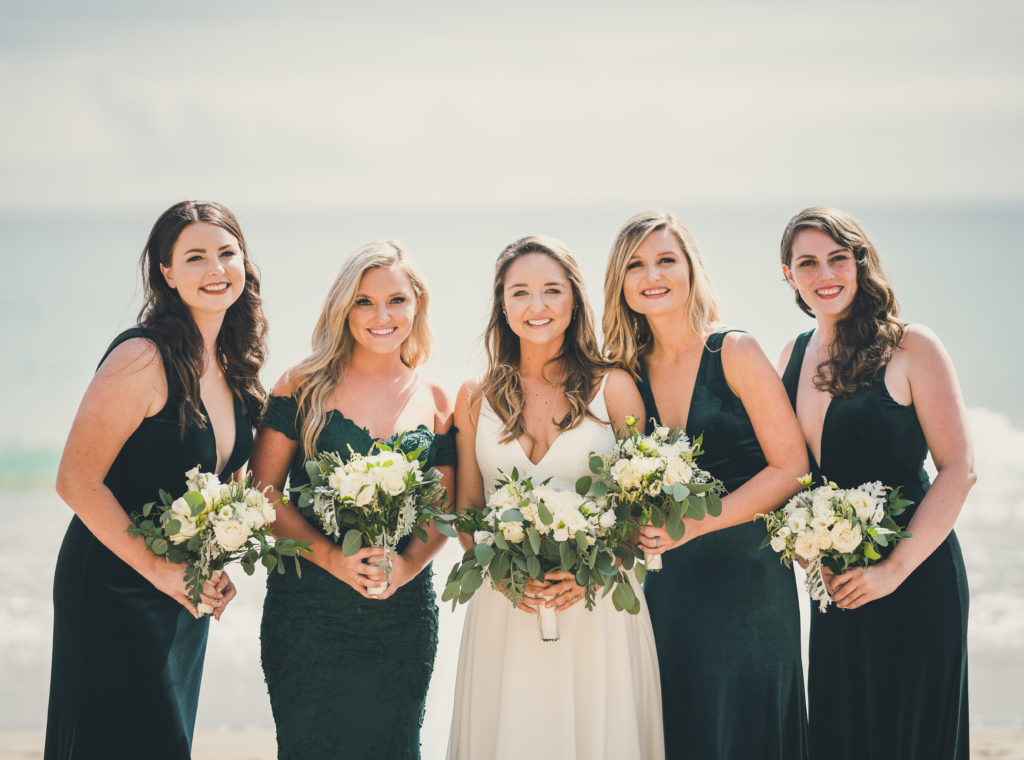 Of course, my sister with the missing luggage luckily found another green dress in Tralee on the morning of the wedding. Although a mishap, it actually sort of looked planned! 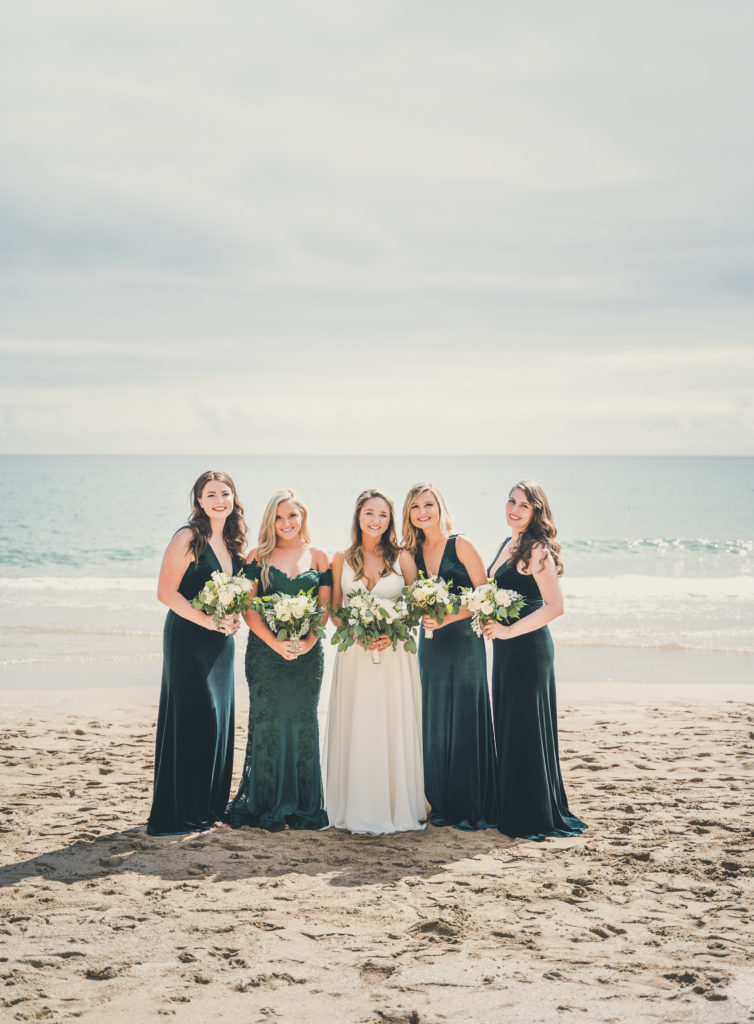 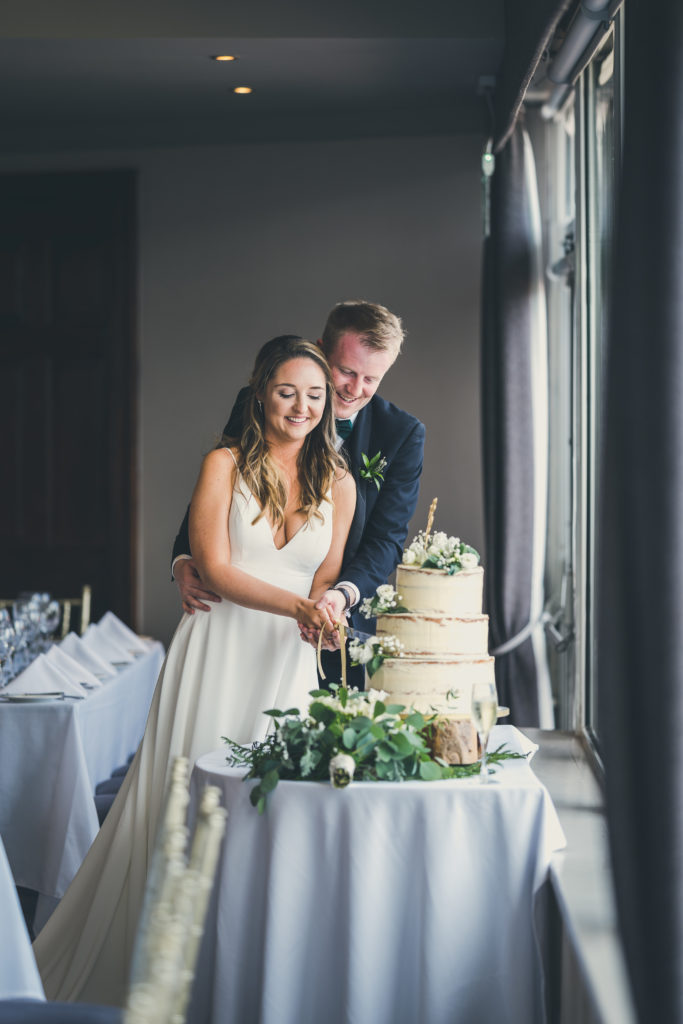 The best decision was having our wedding in Ireland! It made our American guests so happy to have a memorable trip and spend time together as family and friends. Overall, hands down best decision was to get a videographer. It was so special to share our video with special family members. We watch it so often and have a chance to relive the day all over again. 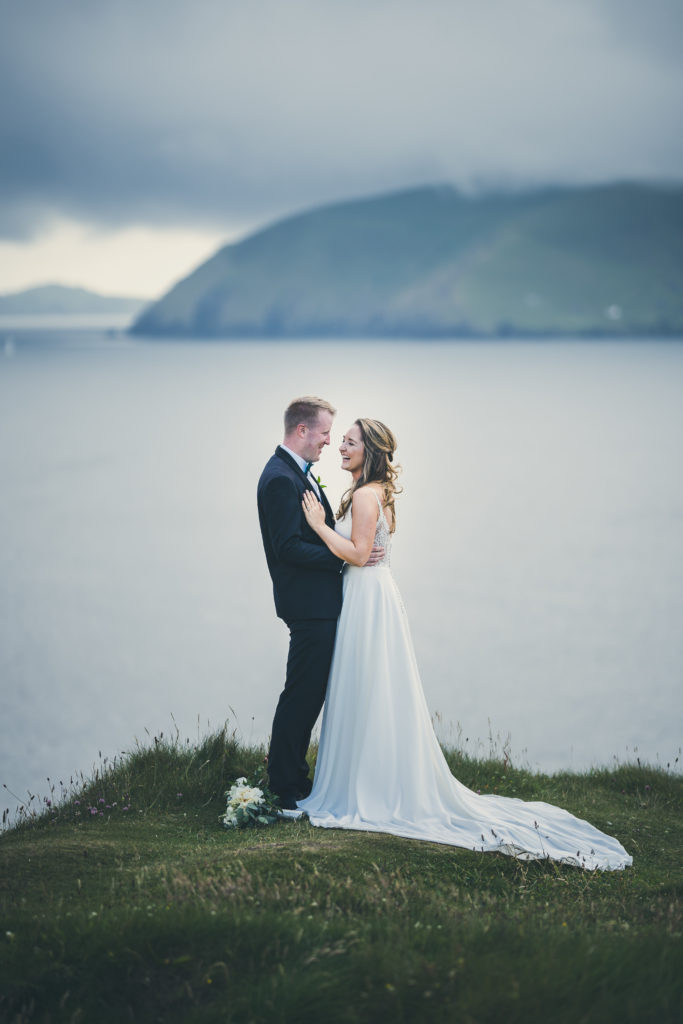 My sister packed her bridesmaid dress in her checked luggage, which the airline lost! Lots of last-minute stresses trying to get a similar looking bridesmaid dress to the rest of the bridesmaids, but in the end, it’s a funny story and lesson learned to pack important things in your carry-on!