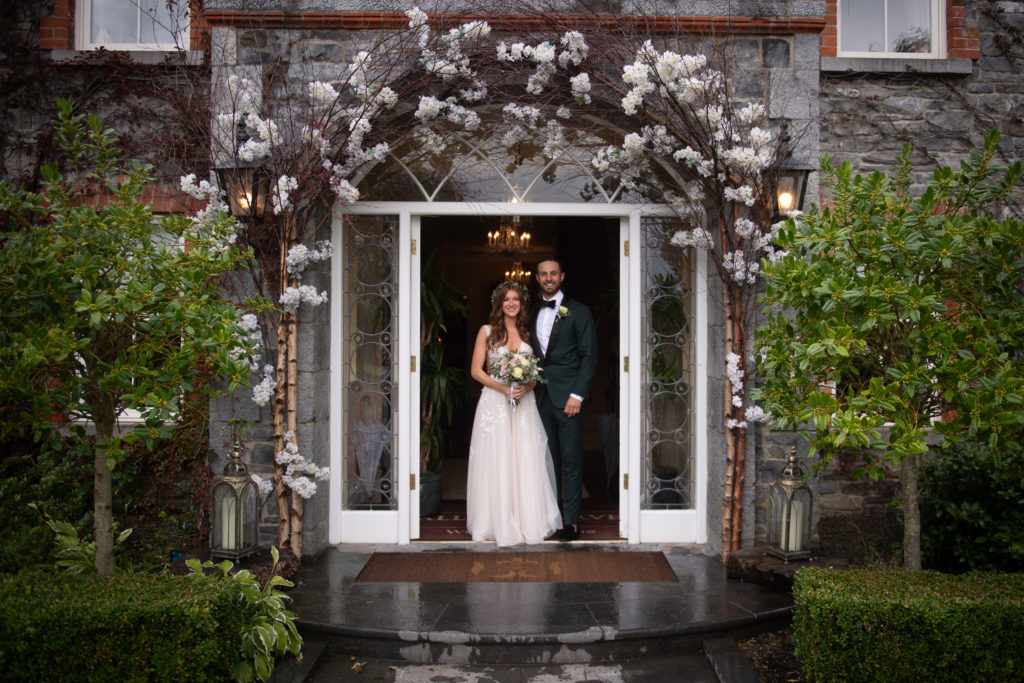 Justin and Molly have known each other all throughout their lives. The couple grew up in the same town in the United States and went to school together from elementary to high school. They became the best of friends when the two were 15 and that friendship has not wavered since, 15 years later. Molly and Justin were always told that they would end up together but both chalked it up to being such close friends. The two were always hesitant to give it a go because they didn’t want to jeopardize their friendship - at least Molly thought they were both hesitant. 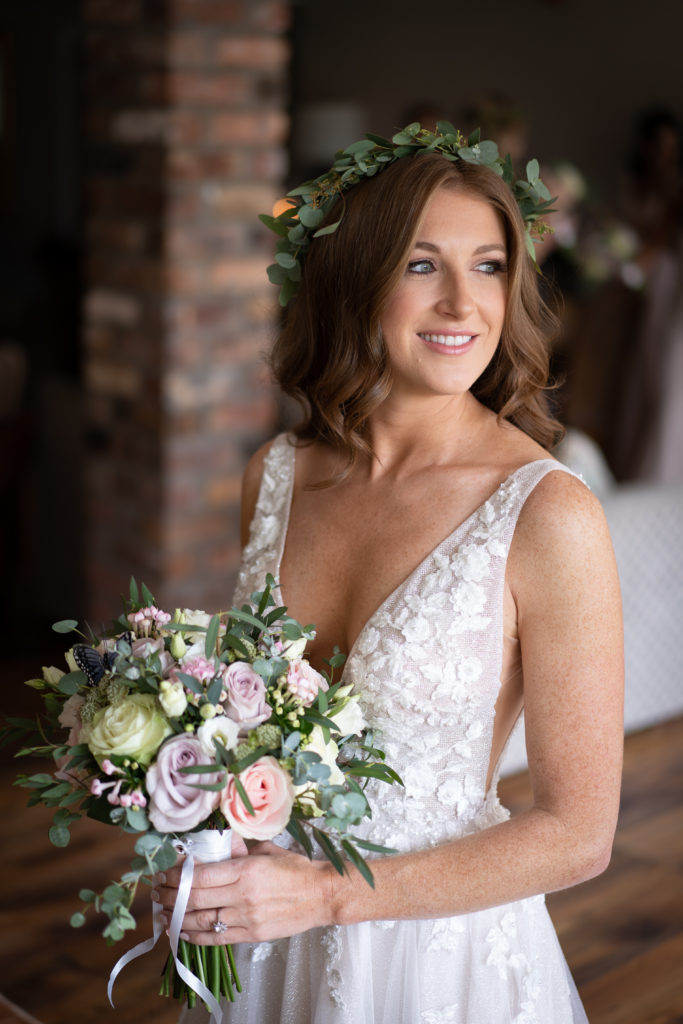 As it turns out, Justin had other plans. Once they graduated college, Justin decided to admit that he did have feelings for his bride all along. Now the idea took some warming up to, considering how close they had always been and the fear of losing that friendship seemed devastating. But as the months passed, the couple's connection and chemistry could not be ignored. They took the plunge and have not looked back since. 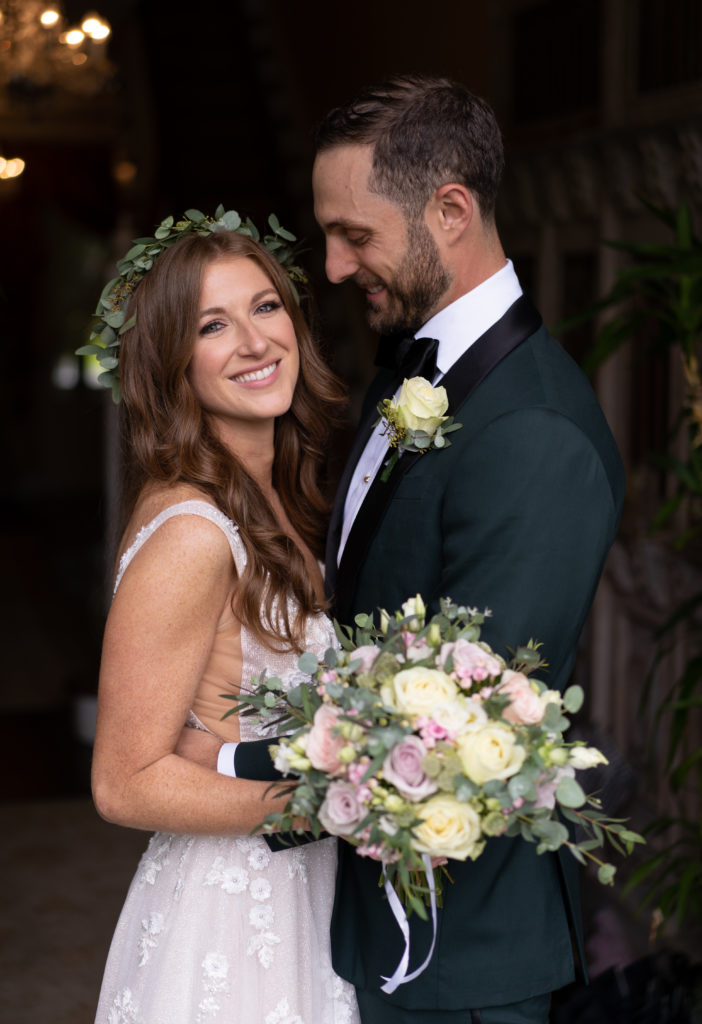 Justin and Molly love to travel and spent most of their early twenties touring Europe whenever they could. Molly's favourite place though in all of Europe to visit is the wonderful, magical Ireland and that so happened to be one of the places She and Justin had not travelled together. So Christmas Day in 2018, they boarded a plane for Ireland and spent the week travelling between Dublin and Galway. Justin had plans of proposing towards the end of the trip when the two were staying at Ballynahinch Castle in Connemara but to his surprise, he couldn’t wait until then! 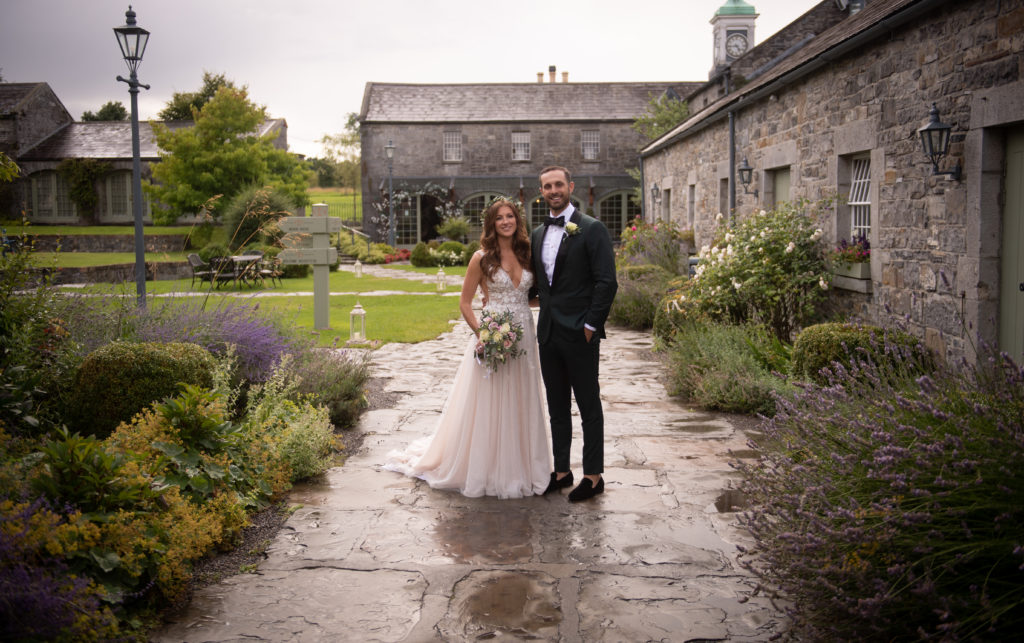 The first day the pair landed, they popped in and out of pubs, enjoying every sip of Guinness’s and it was in between spots he bent down on one knee on Wicklow Street in Dublin city centre and popped the question. Molly was totally shocked! It was the most wonderful surprise as you can imagine. The street roared and cheered as they saw what happened and left the two skipping the rest of the trip. 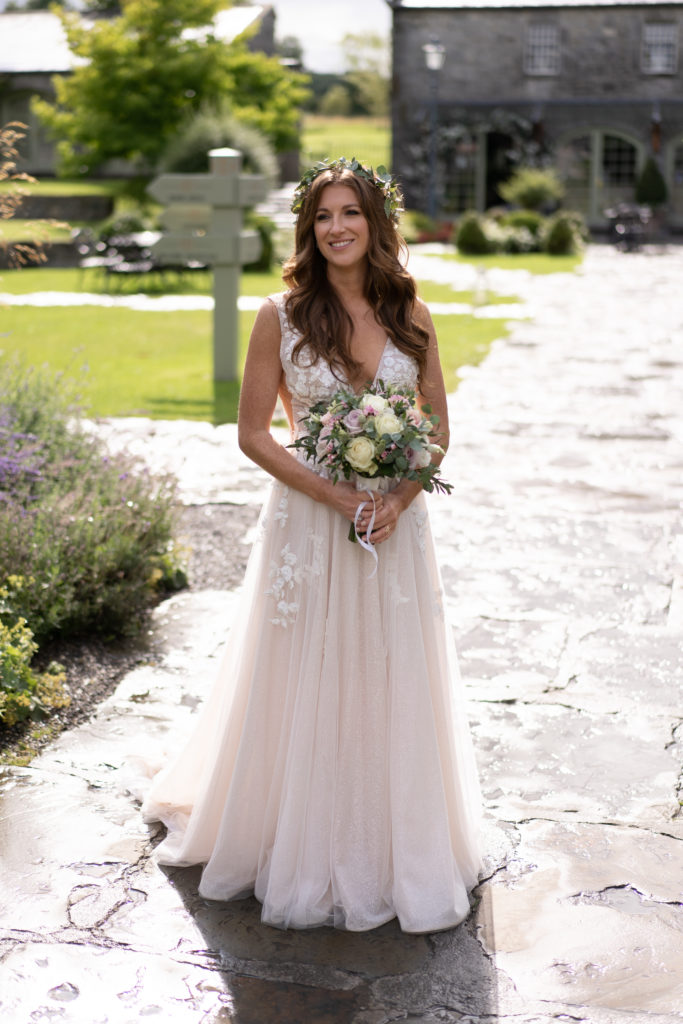 Molly is happy to say she found her gorgeous dress the first weekend she went shopping! Unlike most women, the bride was not into the whole fancy wedding. Molly wanted to find a fun, party dress that she felt comfortable in and found just that at a small boutique in NYC. She kept being asking by the bridal assistant, “Do you feel like a bride in the dress?” and Molly kept answering, “No, no - how does one feel like a bride in a dress?” Regardless, her decision was made and Molly told her she would be calling the next day to place the order. 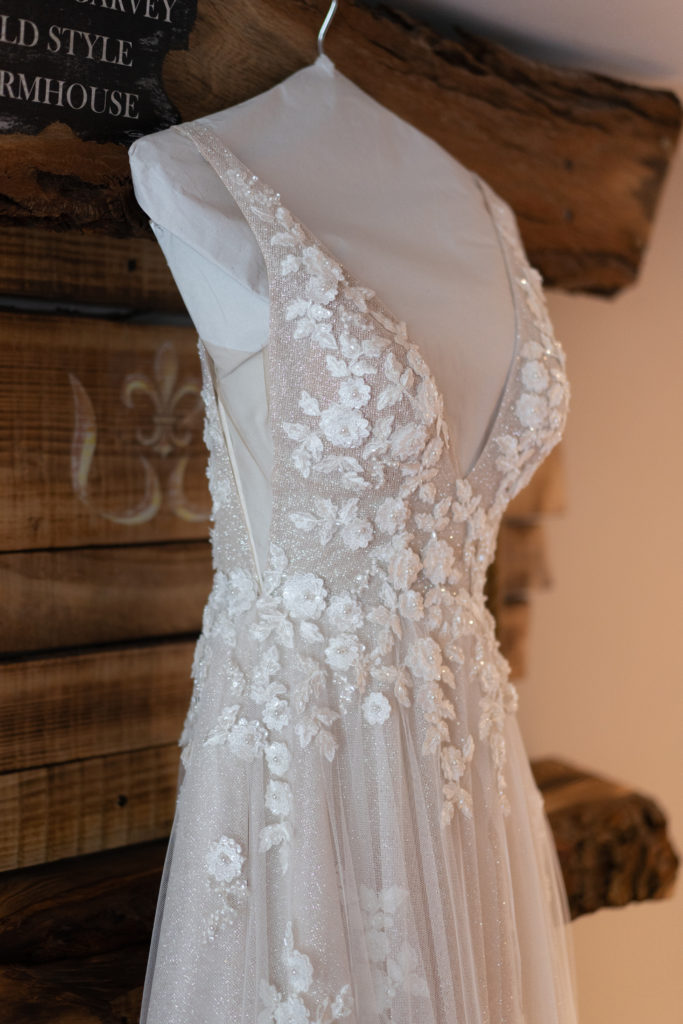 Given they were in NYC, naturally the bridal party had to stop at the famous Kleinfield. Molly told them she had no budget when looking because in my head she already had a dress, the group was just there for the experience and the bride figured when else will she get to try on expensive dresses at Kleinfield. Well, the bridal assistant brought out this unbelievable gown called Pandora by Maison Signore. Molly walked out of the dressing room and everyone around her gasped. She saw herself in the mirror and said aloud, “Ah-ha! So this is what it feels like to look like a bride!” 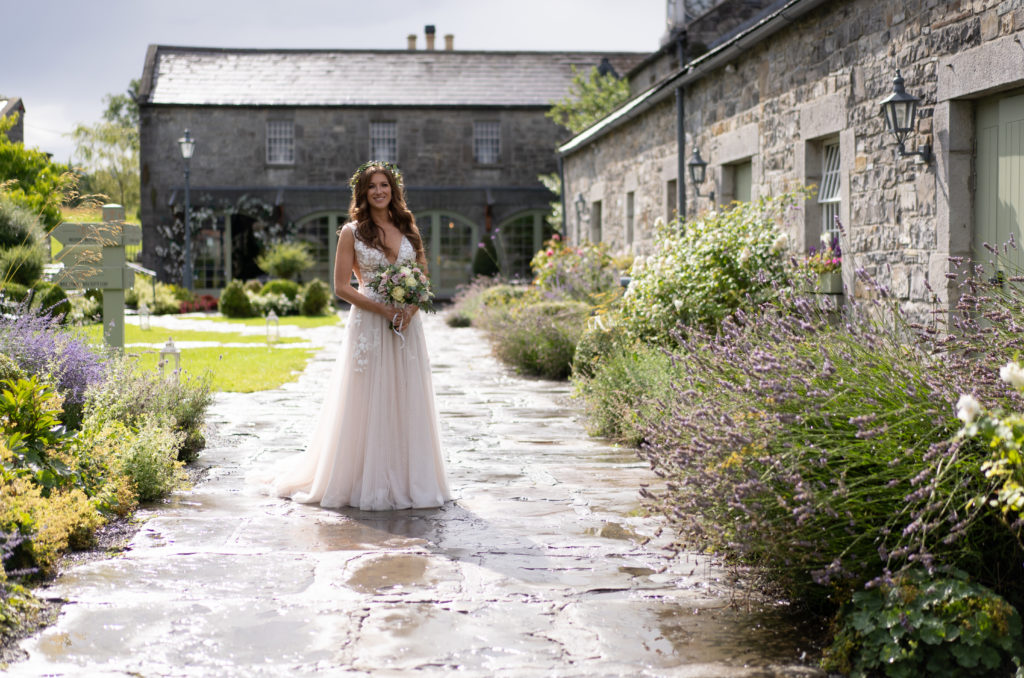 Molly felt like a MILLION dollars! She imagined it was how Sarah Jessica Parker felt during her Sex & the City wedding dress photoshoot. While it was way out of budget, the bride-to-be decided that she only cared about four things for the wedding: how she felt, good food, good alcohol and good music, and she felt AMAZING in this gown. It was an absolute dream and continues to be the most gorgeous wedding dress Molly has seen to date. 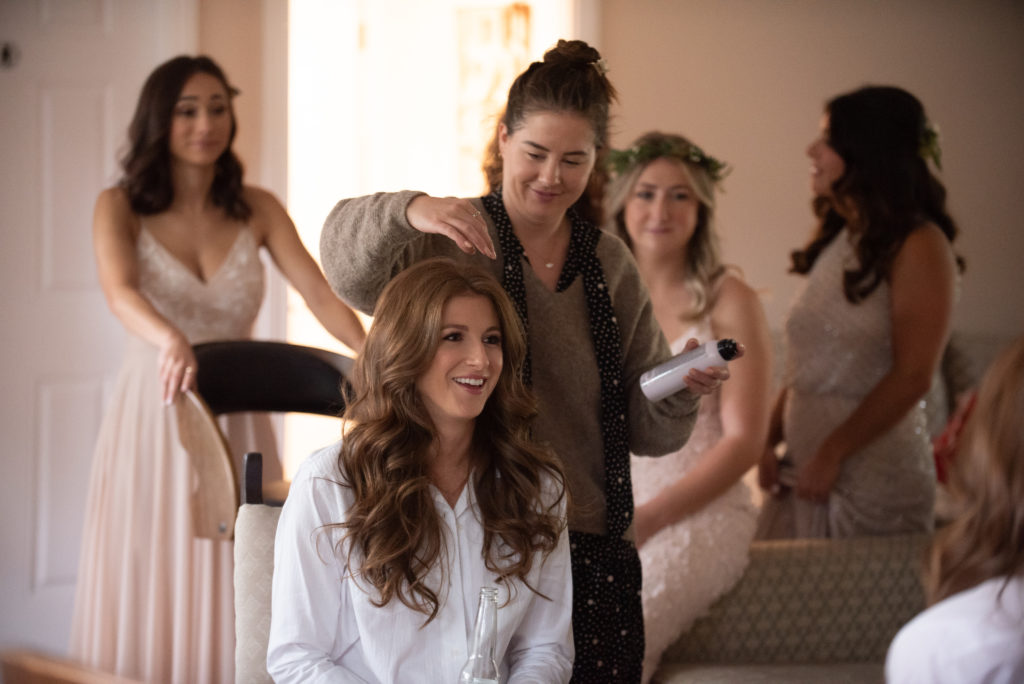 Some say it takes a village. Molly says it just takes two really, really talented, wonderful women to make you feel beautiful on your wedding day – Yvonne & Katie. The bride was lucky to have Yvonne Sheridan do her make-up. She went for a glammed-up, au naturale look. The lovely Katie Keany from The Craft was hired for hair. With their work, the bride still looked and felt like herself but had a little extra sparkle. 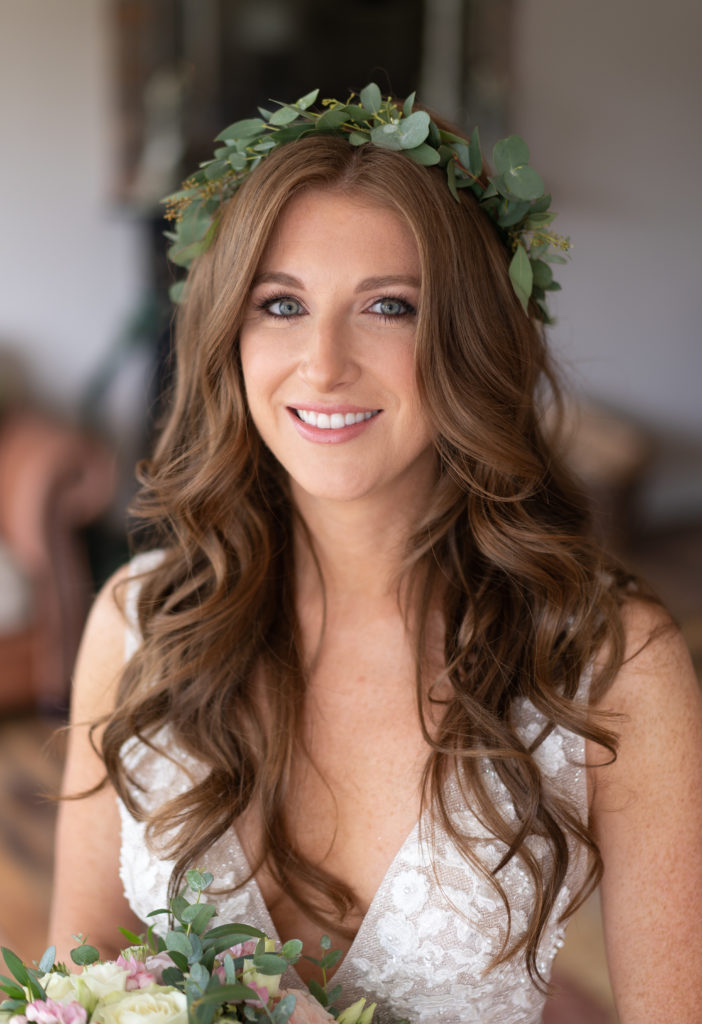 The brides signature scent was her everyday perfume, Lancôme La Vie Est Belle. Why change it up when you know what works? 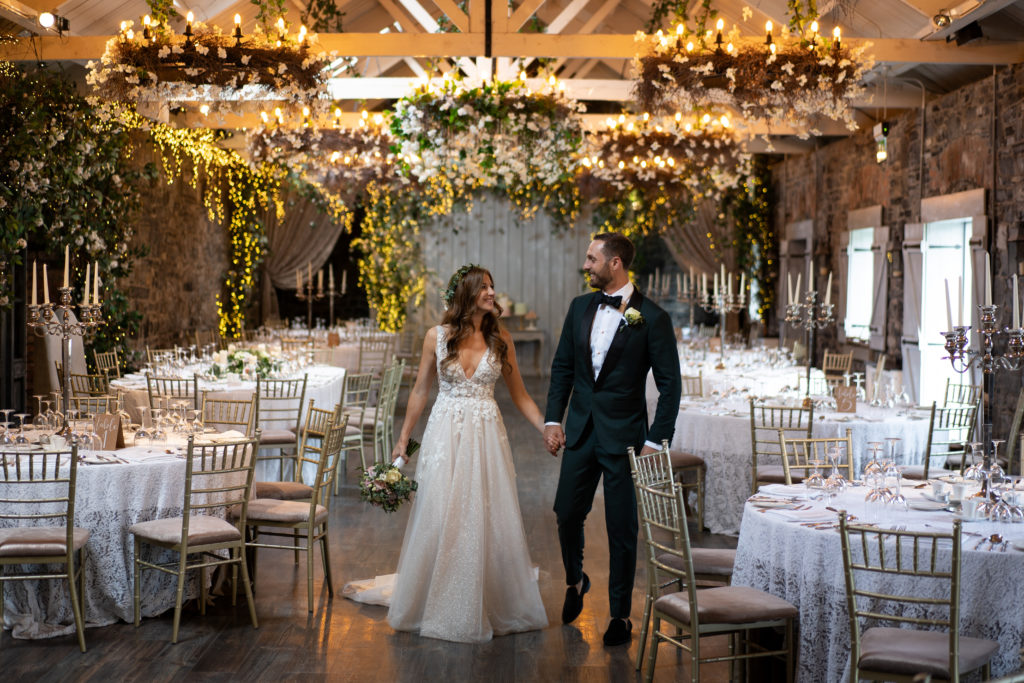 The couple both grew up on Long Island, New York where people spend their life savings on an extravagant 5-hour wedding. They are gorgeous and lavish but Justin and Molly wanted to have an experience that was more personal and intimate. They always felt so lucky they were able to travel to many different places and thought, “What if we could get others to experience that with us?” So, the couple decided to bring their closest friends and family to beautiful Ireland for the trip of a lifetime. Justin actually found Ballymagarvey on Pinterest. The two were in love with the images but concerned it would not be as magical in person. 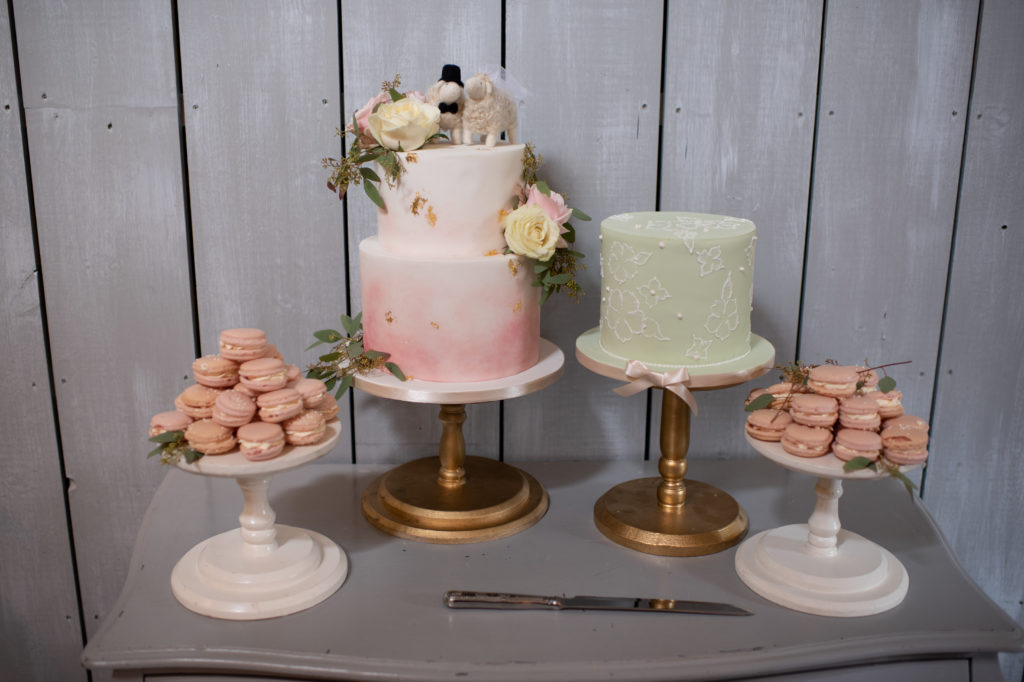 Once the two saw the venue during a visit in April, Molly and Justin were blown away by the charm and beauty it possessed. To the two, the place didn’t need a thing! It was unlike any venue they had ever seen and knew their guests would feel the same way. Molly and Justin wanted to keep our decorations simple and personal so people could really take in the true charm of Ballymagarvey. 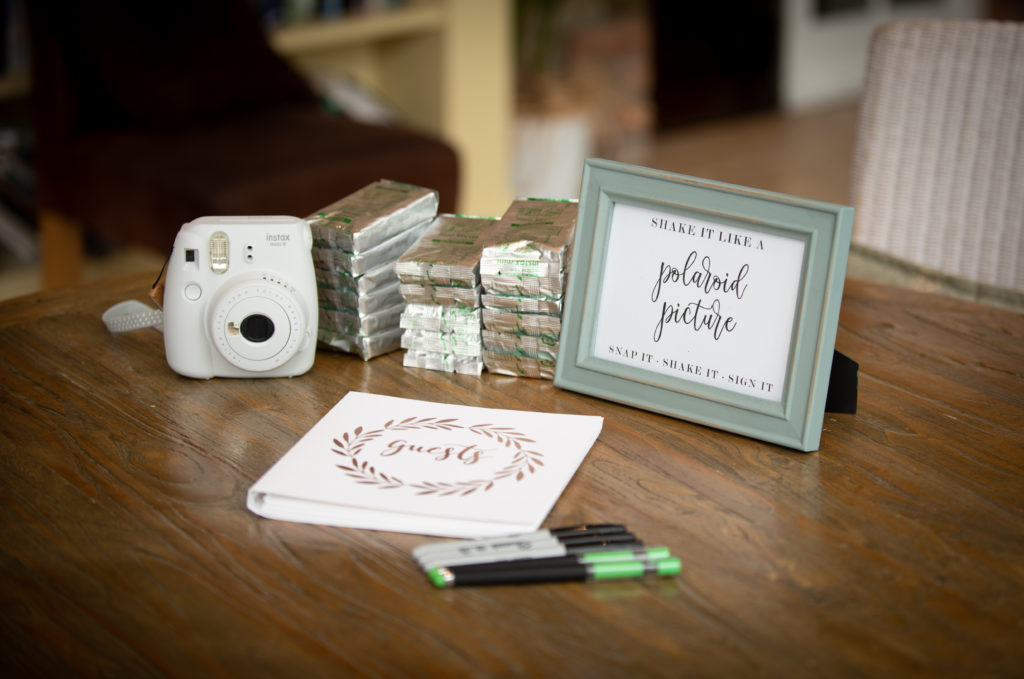 The wedding colours were shades of off-white, blush and everything in between and the theme was “Molly & Justin”, the pair incorporated things they loved throughout the day. They had their parents and grandparents wedding photos with them during the drinks reception to honour all the love that had brought the two to where they are today. The couple also had a Polaroid photo book for guests to document their day and leave the newlyweds with some candid surprises. Justin and Molly collect coasters from all the places they travelled so they created personalized ones that lined the bar for their guests to use and enjoy. 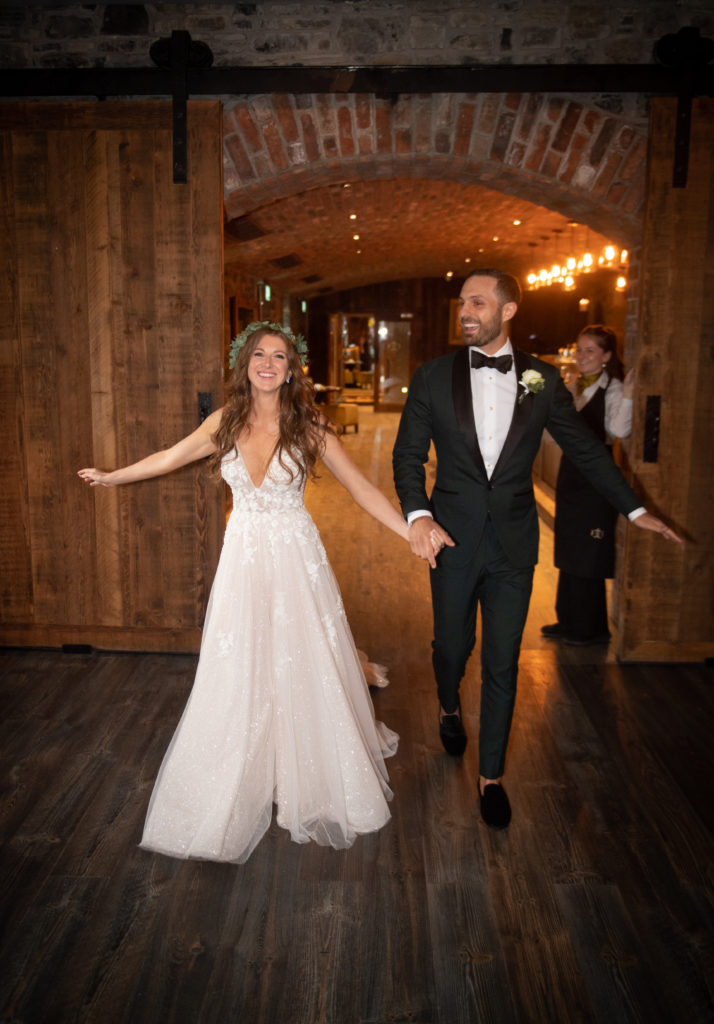 The pair had the wonderful band ‘Celtic Breeze’ during the drinks reception. They wanted their guests to enjoy traditional Irish music, one of the pair's favourite things that Ireland has to offer. Celtic Breeze provided just that for the big day and it was delightful! After dinner, ‘The Firm" joined the celebrations. With both female and male vocals and a whole lot of zest, this band had the guests on the floor all night. They were such a trip and such good company that the pair insisted they stay after the music ended and join the wedding party for drinks. 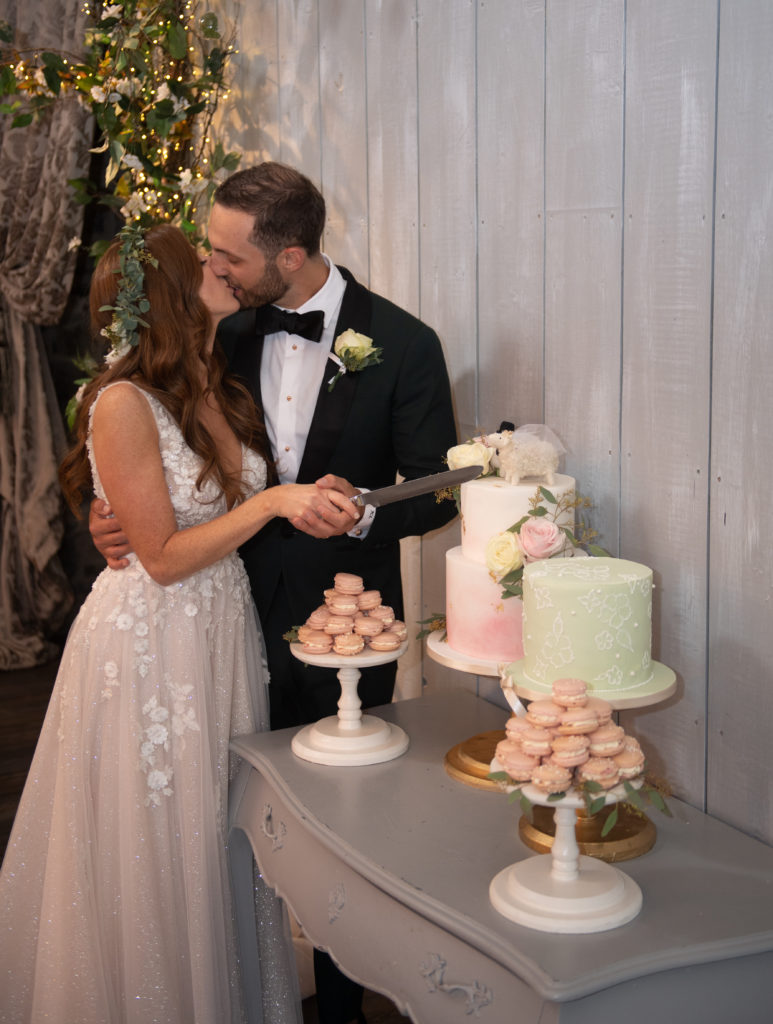 While this isn’t what you traditionally think of when you hear entertainment, Molly has to add their officiant to the list - Brian, Justin’s oldest brother. He had everybody in tears, tears of laughter, happiness and gratitude from start to end. Brian surprised the couple with the ceremony – Molly and Justin's only request was for it not to be religious. He started off acknowledging their parents and then brought up one of the groomsmen for a reading, the “Book of John”, and Molly's first thought was “Oh no!” As it started to be read, they realized it was lyrics from one of the bride and groom's favourite Elton John songs, it was the “Book of (Elton) John.” This was followed by the Book of (Jerry) Garcia and last but not least, the Book of Frank (Sinatra). 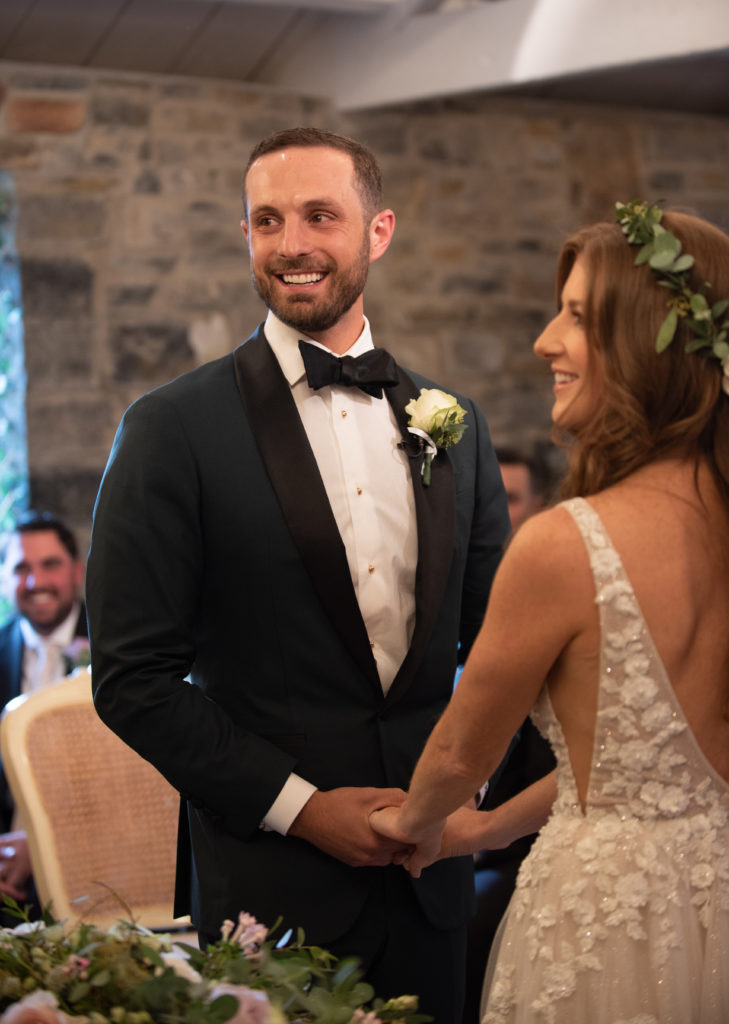 The ceremony becomes the pair's love expressed in lyrics, their favourite love songs. To this day, that ceremony was probably the greatest 40 minutes of Molly's life and guests still talk about it to this day. 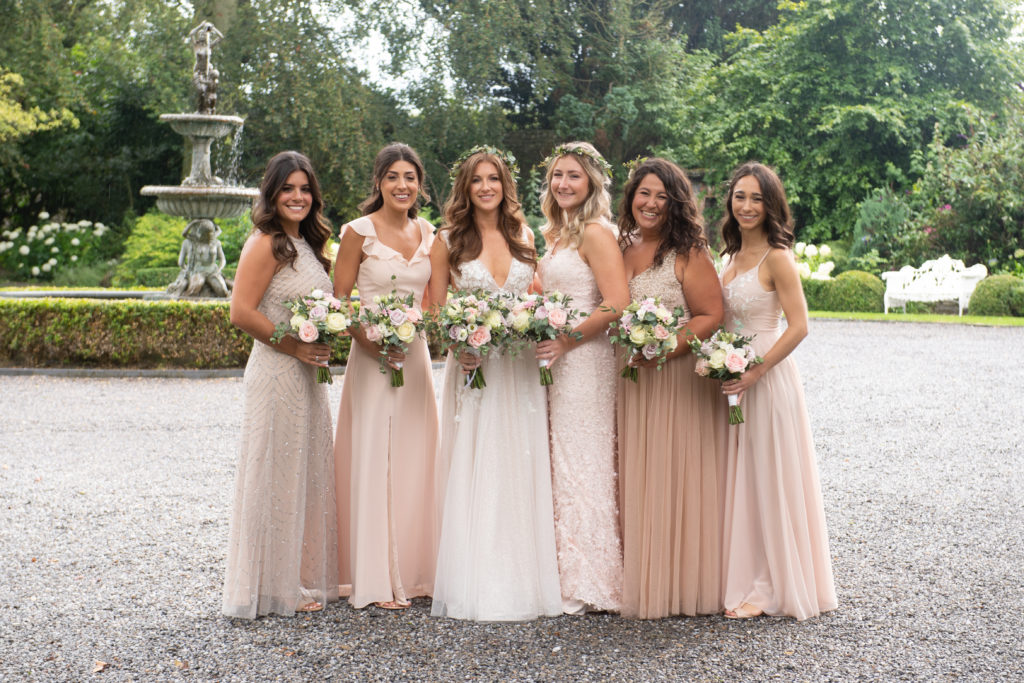 Choosing this crew was the easiest decision Molly had to make. Her maid of honour was her lovely sister, Emily and the bridesmaids were the brides closest friends that she had grown up with. 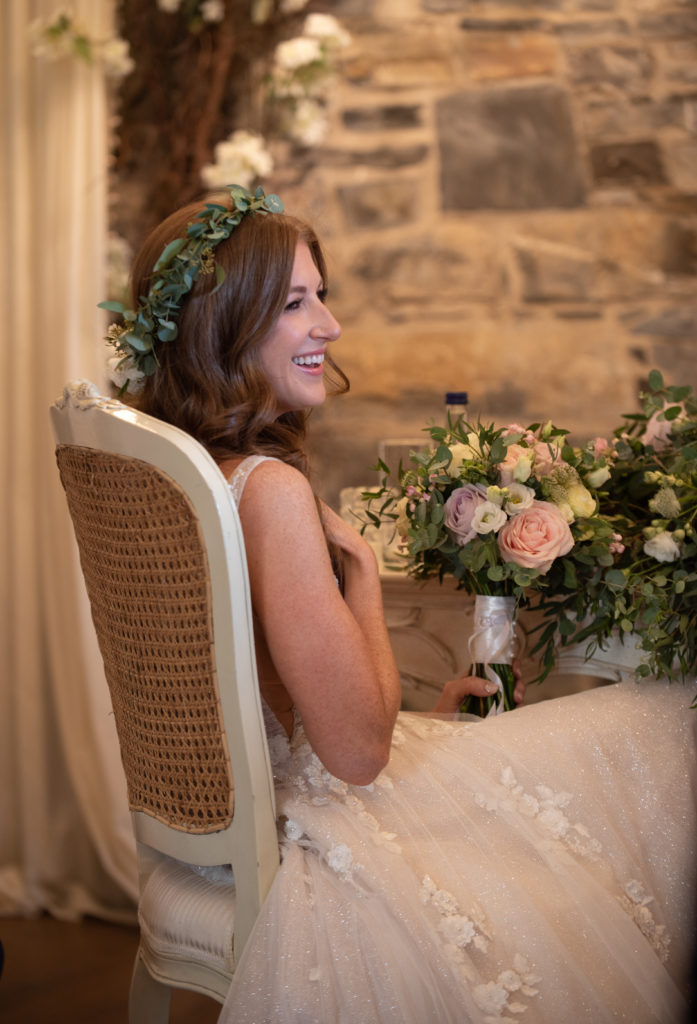 The couple asked each bridesmaid to choose a dress either a shade of champagne or blush. Molly's only request was that the bridal party choose something they would feel beautiful, comfortable and happy in; a dress they loved and felt complimented them. 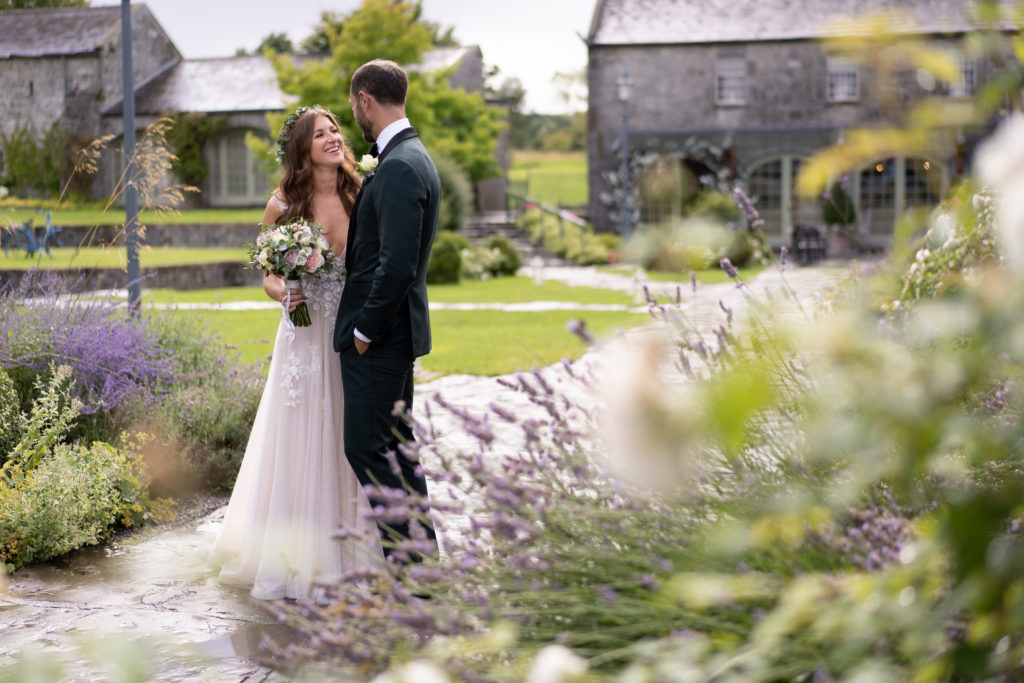 "Deciding to get married at Ballymagarvey! It brought so many friends and family to Ireland who otherwise never would have visited. They were able to experience all the magic we love so much about Ireland and make memories they will carry with them forever." 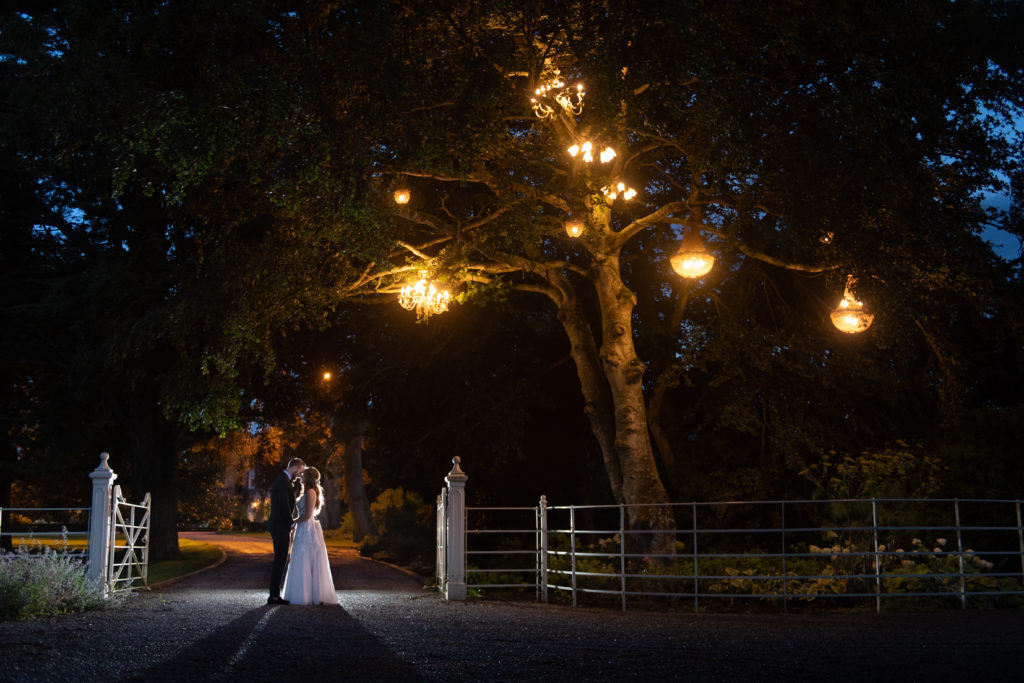 "Not insisting that all of our guests stay at the venue the night of! I think many of them were kicking themselves for not booking a room."