Wondering what information to include on your invitation and how it should be worded? Our easy to follow guide includes all the key points! 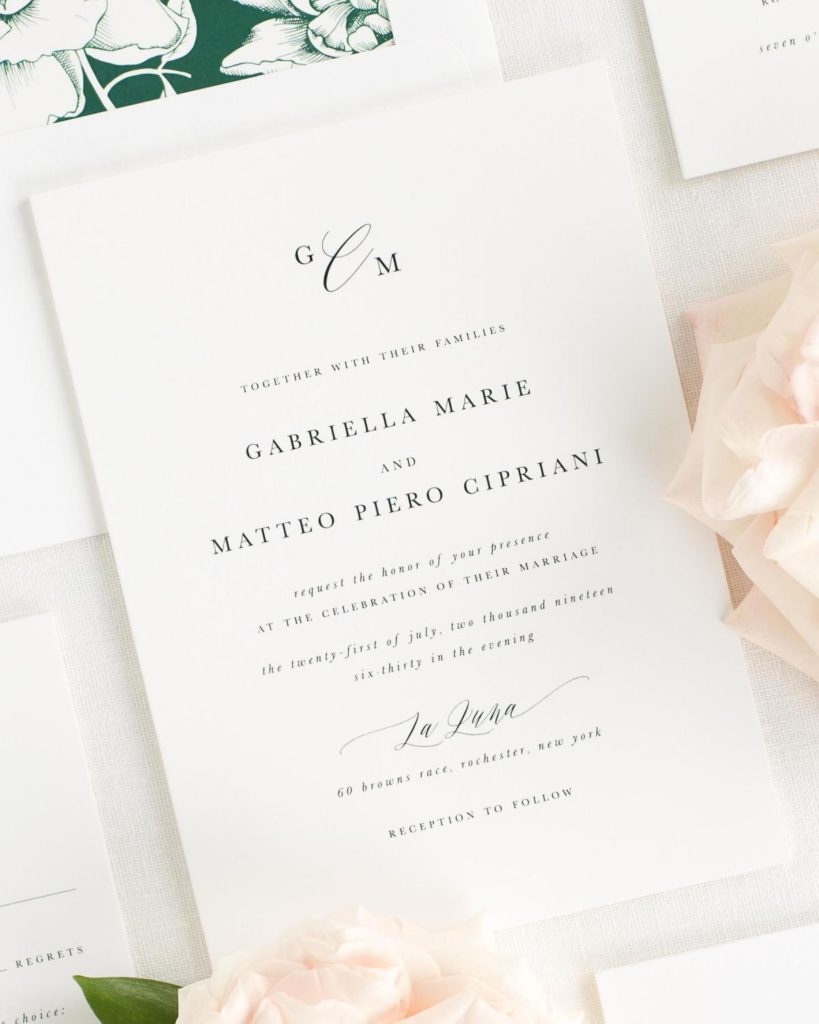 Your invitations are your guests first introduction to your wedding so they should set the tone for the style of celebrations you are planning. The main points to include are the who, when and where of the event – who is getting married, who is hosting the event, when the event is on and where the ceremony and reception will be held along with the dress code. The design should reflect the aesthetic you are planning for the wedding itself so this is where you can express your personalities, but the invitations must be clear and informative. Below are some samples of how to word your invites.

Traditionally, the bride’s parents paid for the wedding and so were considered the hosts, meaning their names would appear at the top of the invite as follows: 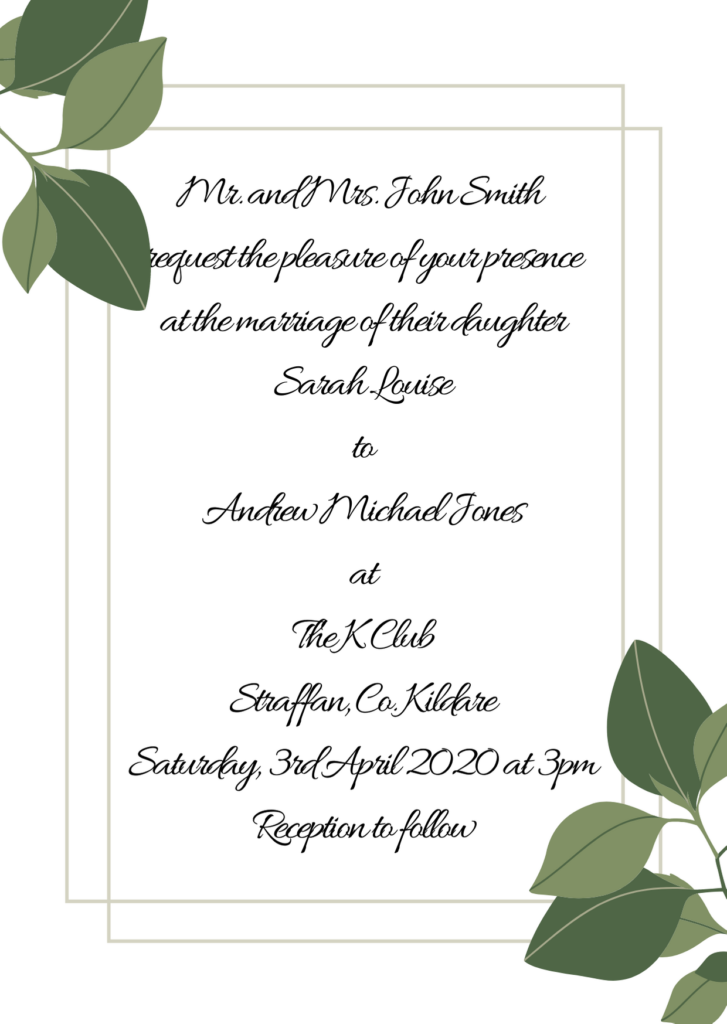 If the bride’s parents are hosting but they wish to include the groom’s parents’ names, they can be included below his name as follows: 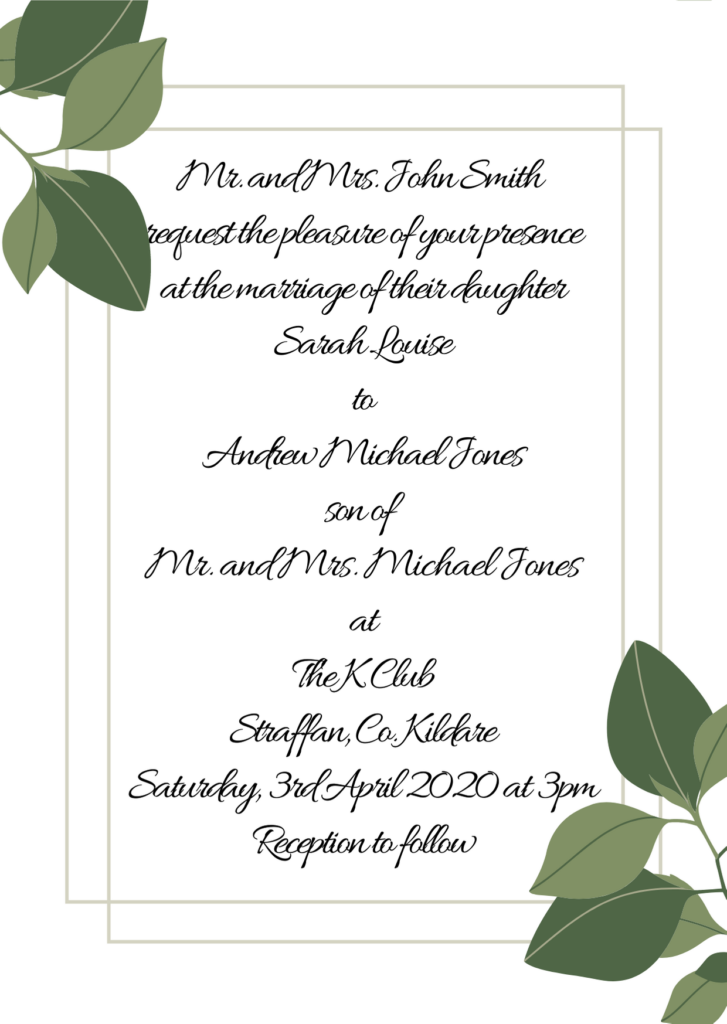 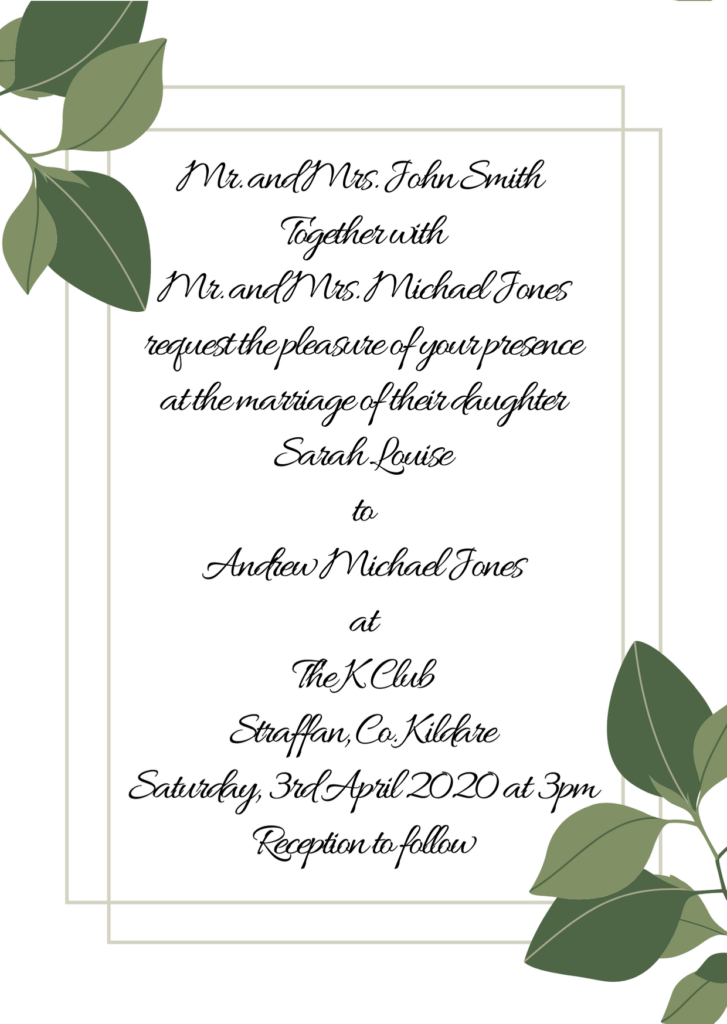 If the couple themselves are hosting it, which is now far more common as the average age of couples getting married increases, the format changes slightly and should read: 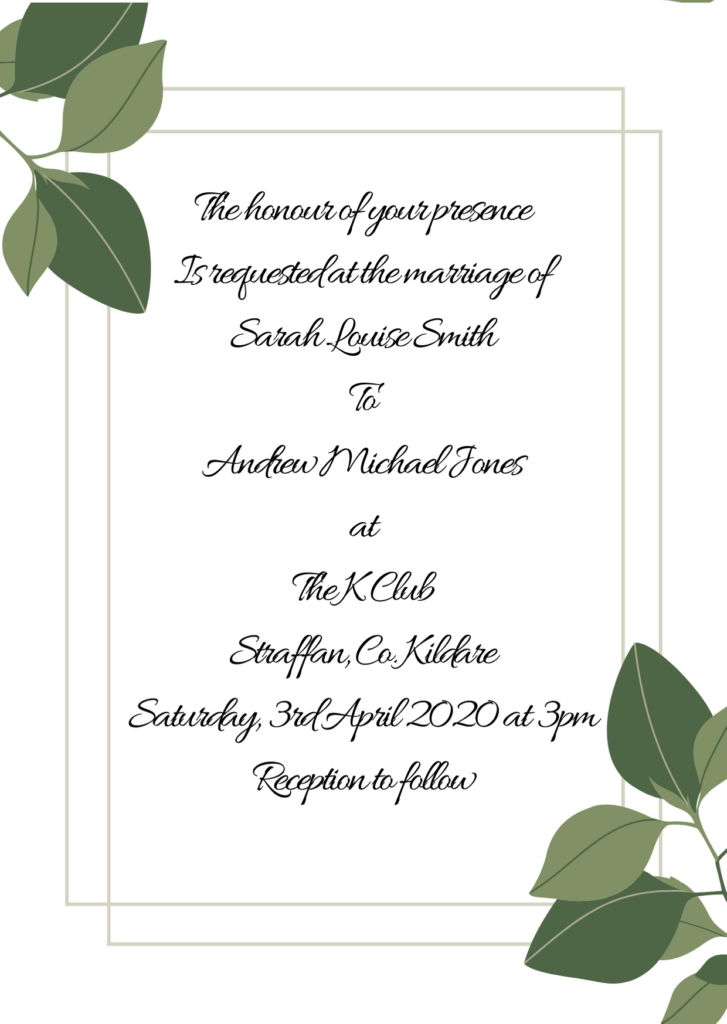 If the groom’s parents are hosting and wish to have their names inviting guests, the brides name still needs to appear first so it should be phrased as follows: 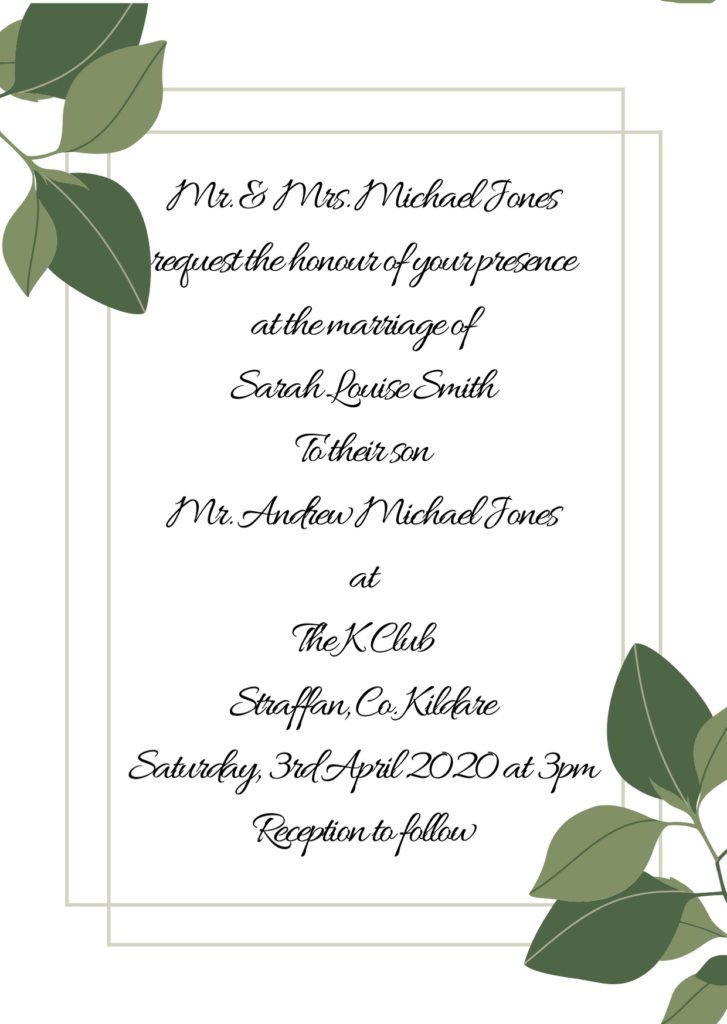 If the couple and both sets of parents are hosting, or if there is a complicated family dynamic and you want to include everybody, the easiest way to achieve this is as follows: 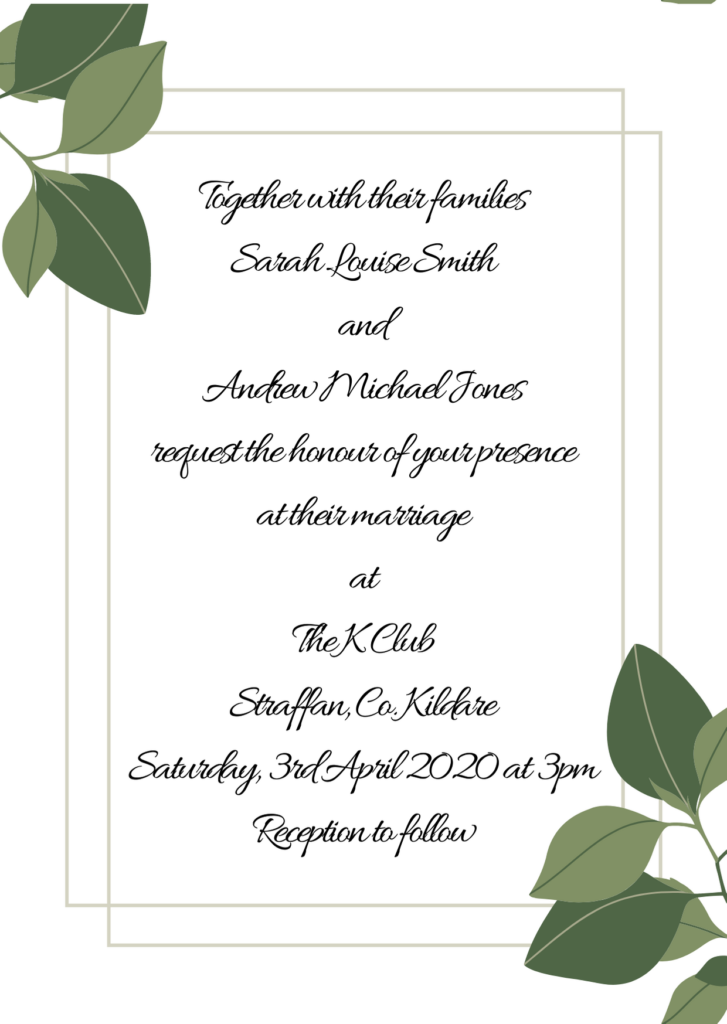 When the wedding is being hosted by a divorced set of parents, it’s important to give each divorced parent their own line, with the mother always appearing first. If the mother is not remarried, refer to her as Ms., followed by her first and last name. If a stepparent is being included, they can run on the same line as their partner: 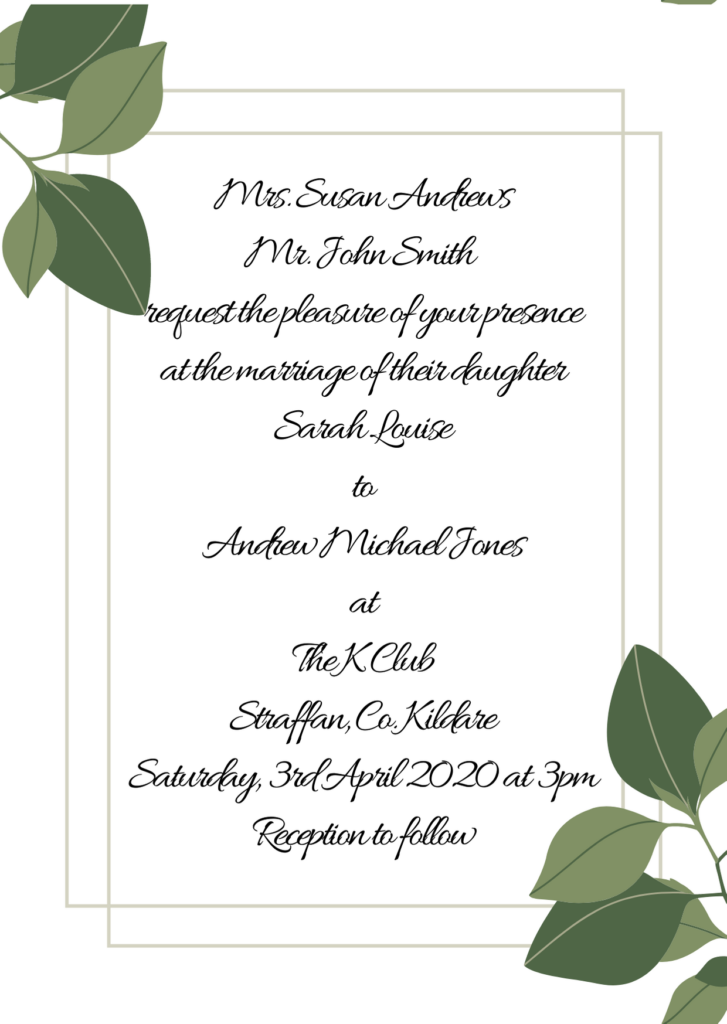 If a parent is deceased and you wish to include them in the invitation, it is not possible for the deceased parent to host and so it should be rephrased slightly such as the below: 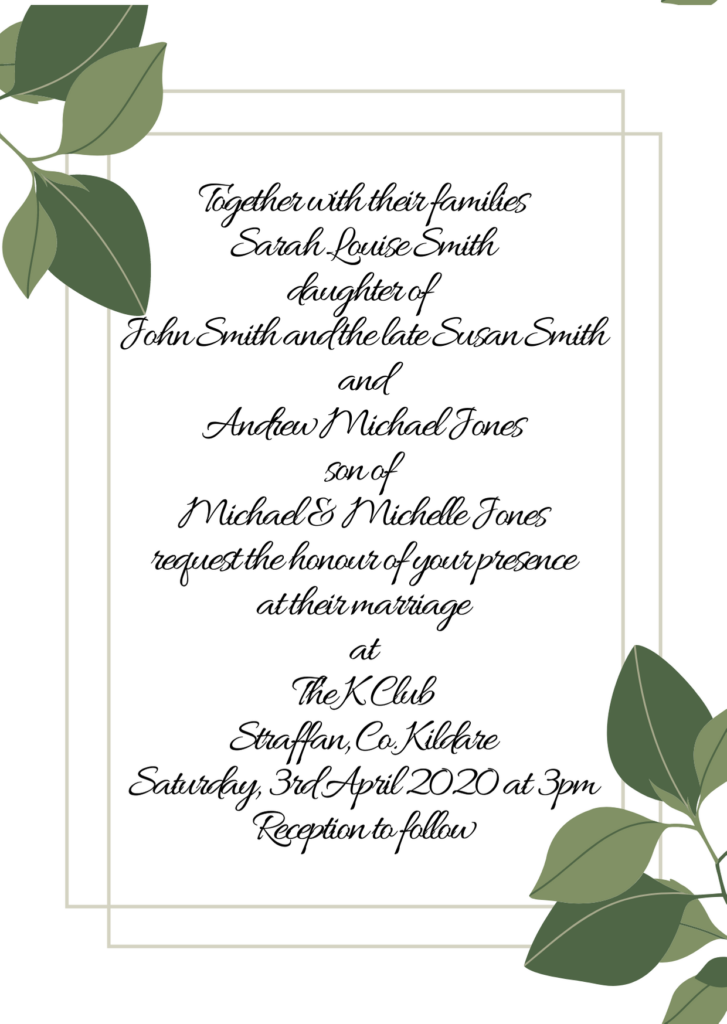 If a living parent is remarried and they are hosting the wedding, but you wish to include a deceased parent, the best way to include them is as follows: 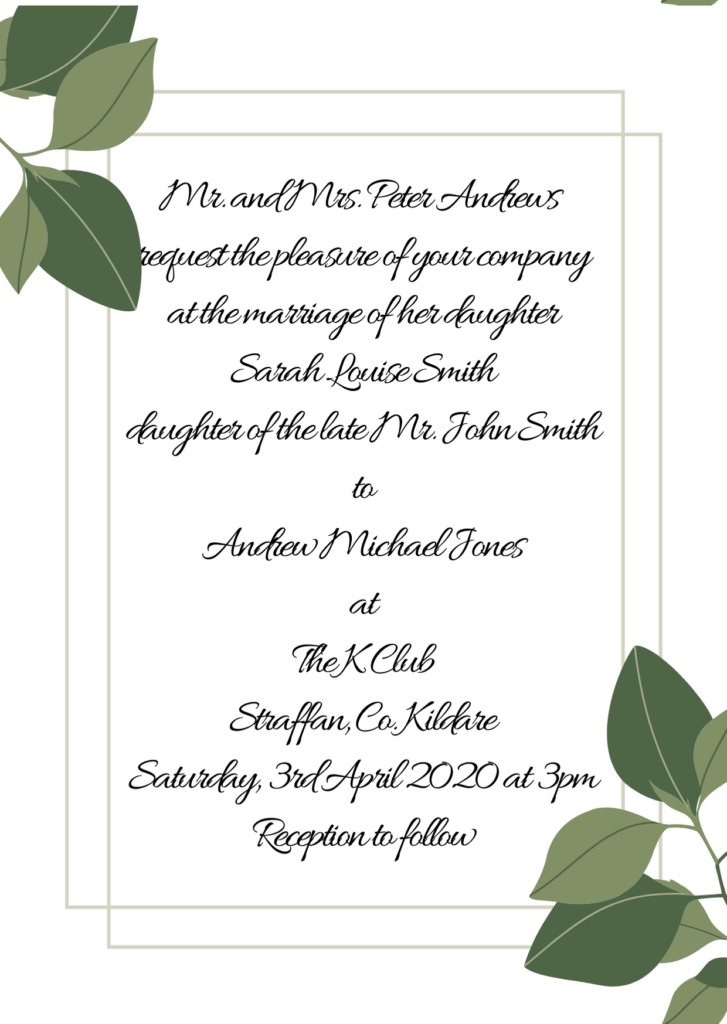 Generally, “the honour of your presence” is used for religious weddings held in a place of worship and “the pleasure of your company” is most commonly used for secular weddings.

The bride’s name always appears before the grooms, irrespective of who is hosting. If the parent’s names are listed as hosts then use only the first and middle names for the bride.

For formal invitations, the date and time should be spelled out. For example: 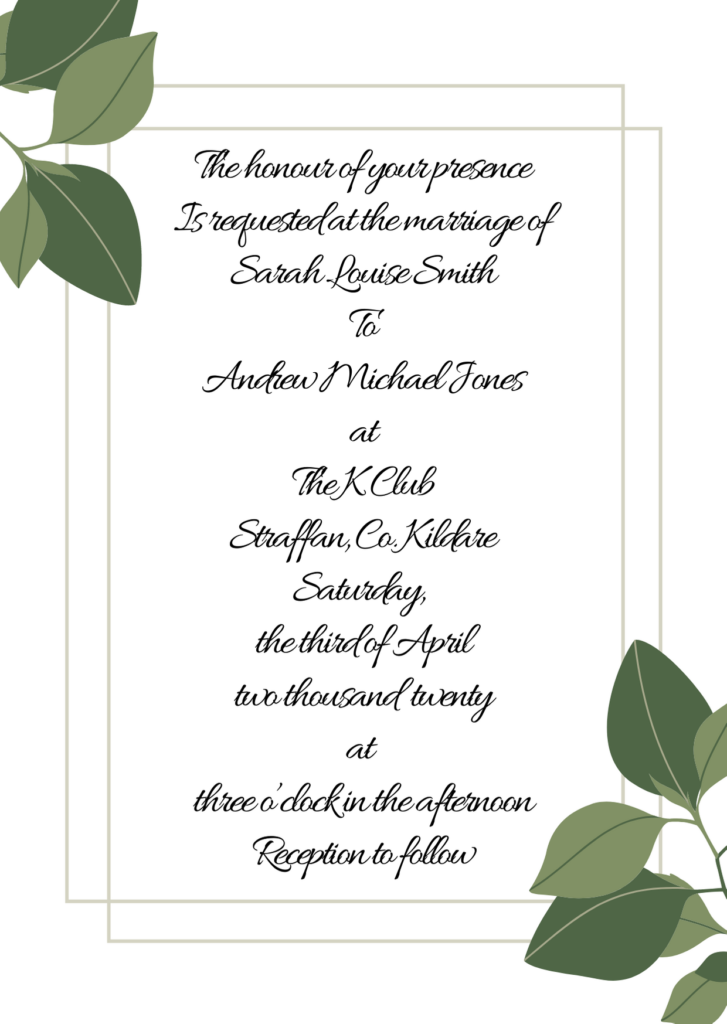 If the wedding is at 3.30pm, it should be written as “half after three o’clock”. For more casual weddings, numerals are fine. “In the afternoon” or “evening” are optional and don’t need to be included.

Do not include the full street address of the venue on the invitation but ensure to include the venue name on one line, followed by the town and county on another.  If the venue is a family home, a venue difficult to find or abroad, try to include a full address and Eircode along with directions or a map on an accompanying information card which is included in the envelope with the invitation. If the ceremony and reception are taking place at different venues, the reception venue should be placed on a separate line, as seen here: 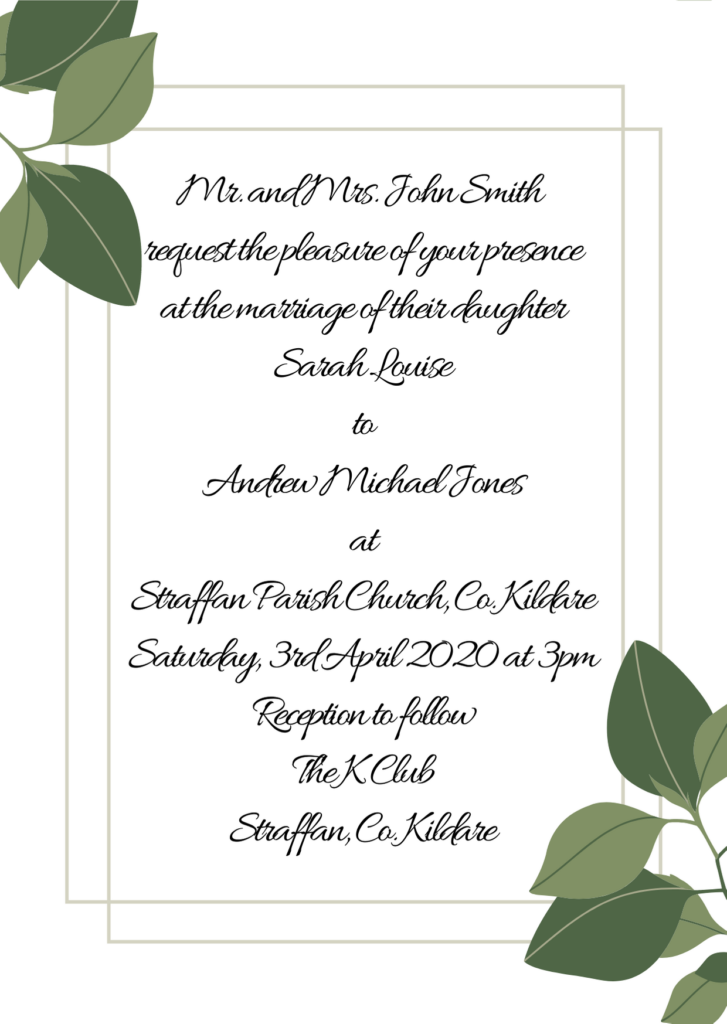 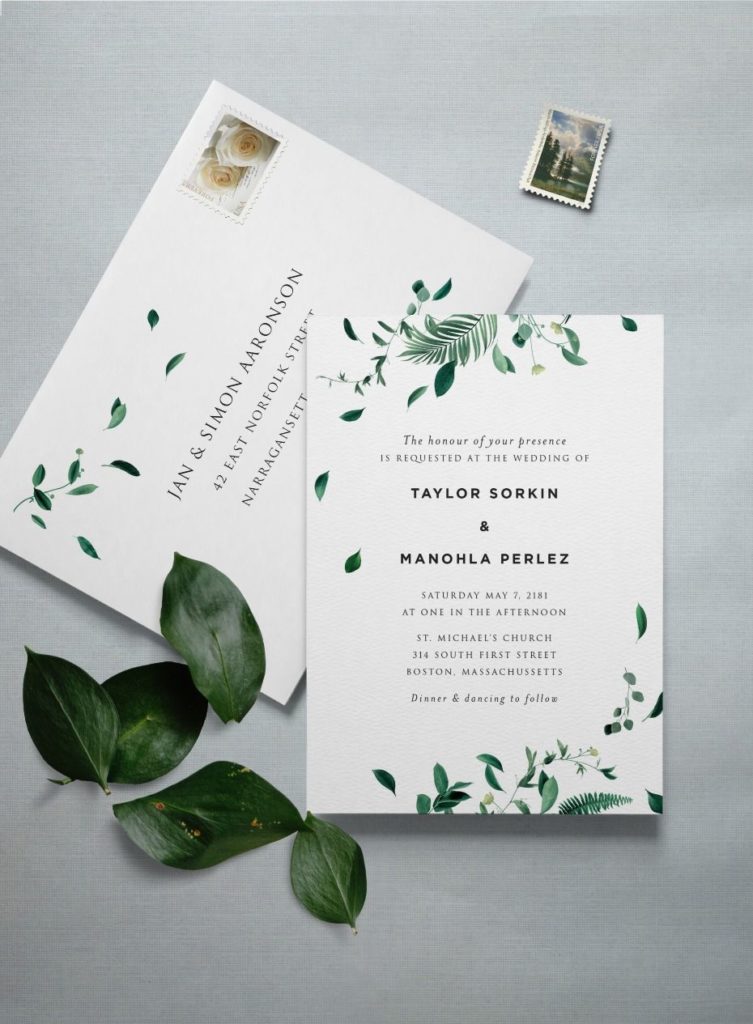 Avoid including any details about gifts on the invitation as this can be considered presumptuous and rude. If you have a gift list, include these details either on a website you have put together for the wedding or on a separate information card to be included with your invitation.

Punctuation should only be included when separating two phrases on the same line, such as the date or the town and county. Only capitalise nouns and new thoughts (such as “Reception to follow”).